Home / Blog / [Shocking Report] Scene of dog hanging at the Busan Gupo market! Please join us in reporting this case!

[Shocking Report] Scene of dog hanging at the Busan Gupo market! Please join us in reporting this case!

posted by KoreanDogs.org team on February 16,2014 in Campaign, News

This is a translation of the February 12, 2014 posting on Busan KAPCA(Korea Alliance for the Prevention of Cruelty to Animals)’s homepage:

We, the planning team of the Busan Korea Alliance for the Prevention of Cruelty to Animals, went out to the Gupo market last weekend to monitor the livestock market when we witnessed the shocking scene.

As we were following a truck full of dogs moving through the market, we saw a dog slaughterhouse butcher taking a dog out of the cage and hanging him by the neck.

It happened so suddenly and we were in great shock but we immediately called 112 (emergency call line to the police in Korea) and reported the animal cruelty.

It was the scene of a dog being hanged to death and a clear violation of the animal anti-cruelty provisions of the Animal Protection Law.

However, the police did not show up as we desperately waited…
So we kept calling 112 but the police responded by telling us to call the District Office.
After our repeated demands, the police finally showed up after 20 minutes!

However by that time the crime scene had already been cleaned up.
So, the police just left saying there is no evidence to bring any charges.

This is so wrong, outrageous and sickening…..
The police is indifferent to our report and has no interest to investigate.

Please look at this photo from the scene.

This white dog was being dragged forcibly as if he knew that he would be killed.
(We were following that dog truck…)
This is what happened next… 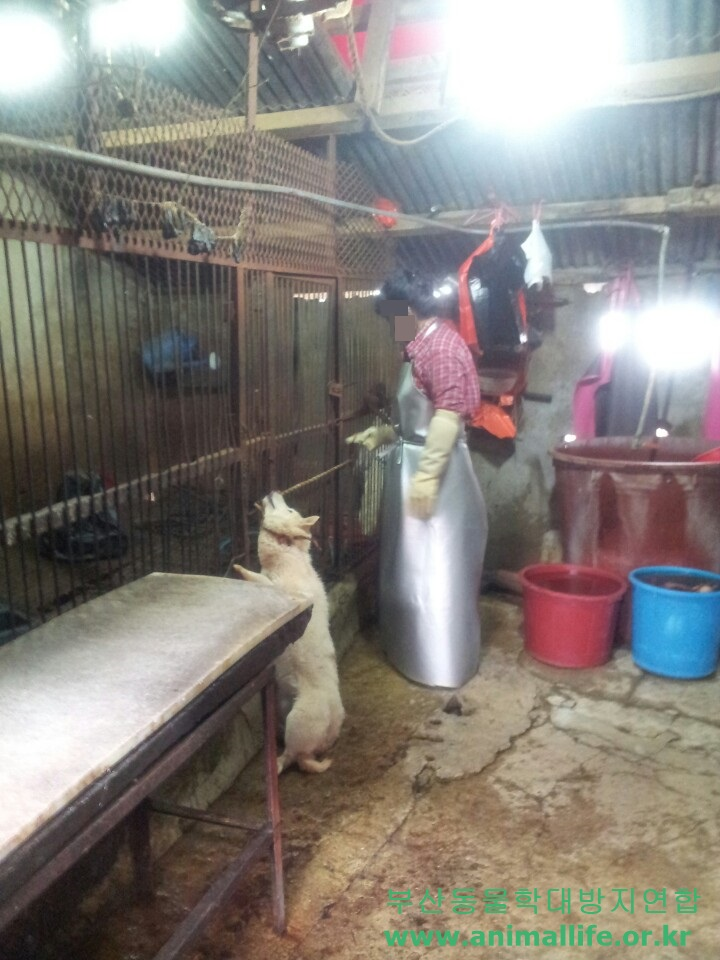 He is hung by his neck.
Our planning team tried to enter the premises but we were blocked by several men…

Our team leader, who witnessed this whole incident, was not able to sleep for many nights due to shock and the sense of guilt.

However the police didn’t want to get involved.
Why is our nation’s police like this?

That is not all.
On that same day there were many vendors who were selling animals illegally right in front of the sign post, warning that the selling of animals is illegal! So we reported this to the police as well. 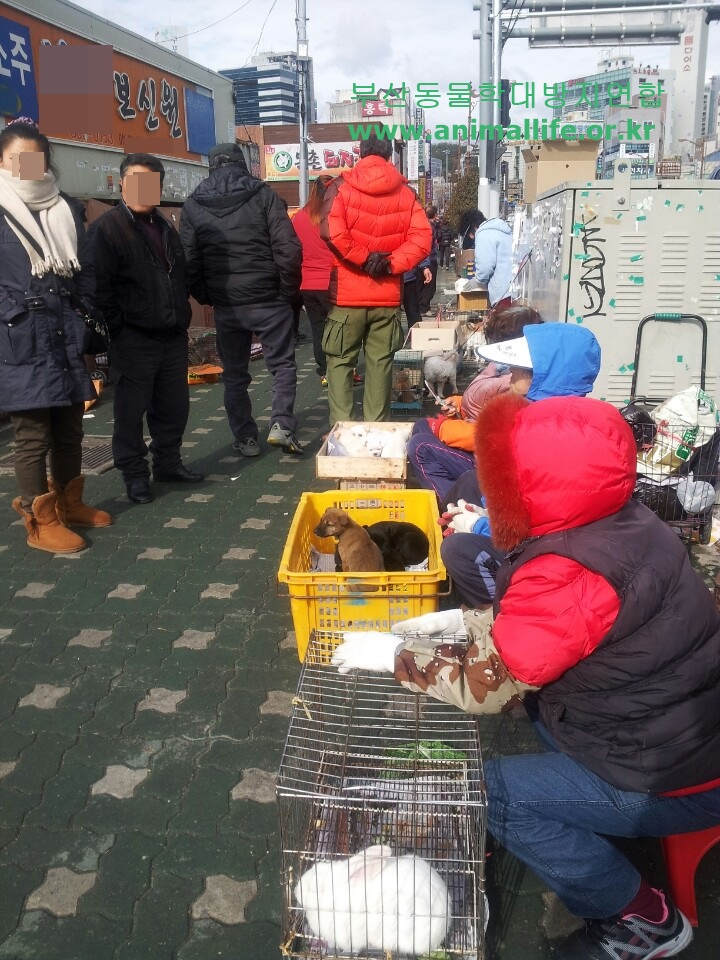 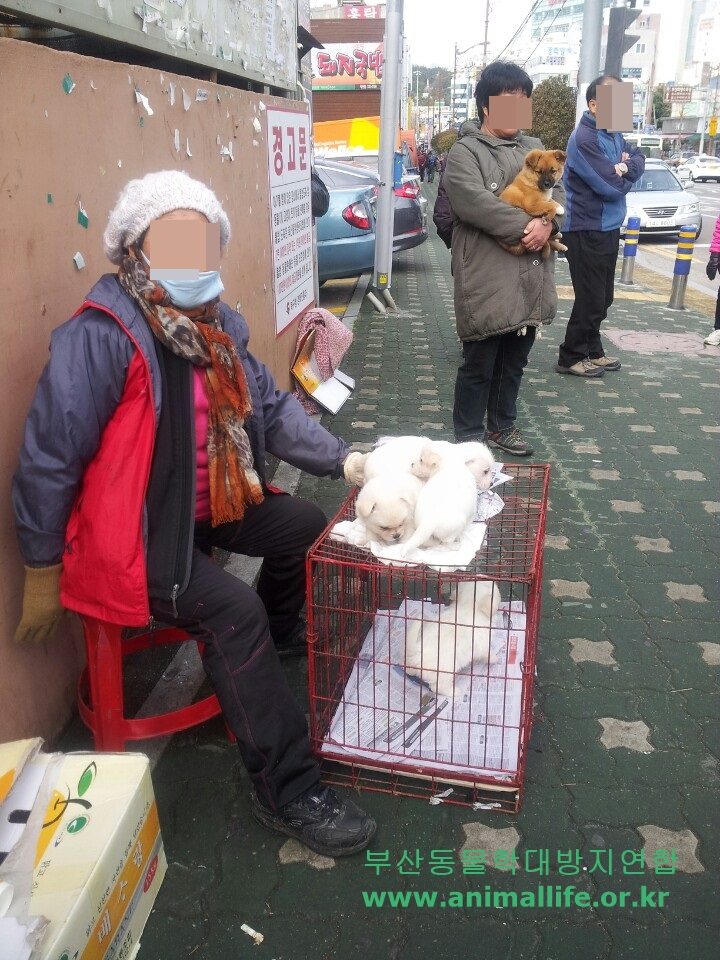 Illegal activities were taking place shamelessly right next to the warning notice!

When we reported this to the police they responded by telling us to contact the District Office instead.

As we called them repeatedly, they finally showed up after 20 minutes but they just parked their police car nearby and did not even get out of the car!

When we reported these violations to the police, we gave them the physical descriptions of the violators but they did not even bother to investigate.

As a result of the police car parked nearby, the vendors who were selling animals, one by one left the area……

After all the illegal vendors had left the area, the police called us to come check the area again saying that there were no illegal animal-selling vendors and telling us again to call the District Office.

Is Busan BukBu Police Station the only police station in Korea that acts like this?
What is wrong with them?

Not even responding when violations are reported and showing up late only after many calls and demands…
Making excuses about not being able to do anything because they didn’t see anything……….

The fact that the animals have to continue to die with agony is so incredibly unfair…
How can the police whose responsibility is to enforce the law be this way?

The fact that the animals have to continue to die in agony is incredibly outrageous!
How can the police whose responsibility it is to enforce the law, shirk their responsibility!?

Because the police is ignoring our report and refusing to investigate, we filed a formal civil complaint last weekend against the Busan BukBu Police.

Animal cruelty is clearly a crime.
Nevertheless, is the police not enforcing the law properly because it’s a case about animals?
Why do they treat these cases this way?

We also filed a civil complaint about the dog-hanging case to the Busan BukBu Police.

We need your help to get the police to conduct a proper investigation, enforce the law and punish the perpetrator.

Please join us and help to get the animal abuser punished by the police and to propitiate the chagrin of the dead dog.

Please join us and help to get the animal abuser punished by the police and to propitiate the chagrin of the dead dog.

Source: Busan Korea Alliance for the Prevention of Cruelty to Animals (KAPCA). 부산동물학대방지연합 Please do not distribute photos without permission.