Home / Blog / Bob Heisler responds to the University of Florida minority student backlash over the KoreanDogs.org campaign in Gainesville

Bob Heisler responds to the University of Florida minority student backlash over the KoreanDogs.org campaign in Gainesville

posted by KoreanDogs.org team on October 16,2014 in Campaign, News

Thank you for allowing me to respond to the student backlash against our efforts to stop the extreme cruelty of the dog and cat meat trade. Here is my response: 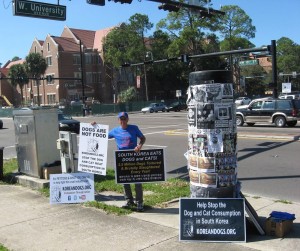 We have been campaigning against the horrific dog and cat meat trade on behalf of KoreanDogs.org on public property near the University of Florida. Of course we are not saying that all South Koreans and other Asians eat dogs. That is a very illogical inference. I myself was recruited to the campaign by an Asian. I expressed my reluctance because I knew that I would be criticized, but I agreed to help anyway. Most of the brave, compassionate people worldwide who are trying to stop the torture and consumption of many millions of dogs and cats every year are Asians.

All animal abuse is wrong, but the deliberate torture and slaughter of dogs and cats is especially cruel. Dog eaters mistakenly believe that the more the animals suffer, the better tasting the meat. Dogs are routinely beaten to death, skinned alive, and slow boiled alive. Family pets are commonly stolen for the meat trade.

We are not hypocrites. We are mindful that atrocities are committed against farm animals right here in the USA. Most of the people who demonstrate with us against animal abuse are vegans. I am not a perfect vegan but I am a very good vegan. We will be conducting a vegan outreach at the Paul McCartney concert in Jacksonville on October 25th. I have spent thousands of dollars on vegan literature, vegan posters, and newspaper ads promoting veganism. I have spent the equivalent of half my income the last two years on animal rights/animal welfare.

Dogs are companion animals, not livestock. Dogs guard our property. Dogs serve in the military and on police forces. Dogs guide blind people and assist others who have physical challenges. Dogs sniff out bombs and drugs. They search for survivors of disasters. Dogs enhance the quality of our lives, especially when we are young and when we are old. They are innocent, trusting, faithful, and loving. Dogs deserve better treatment. 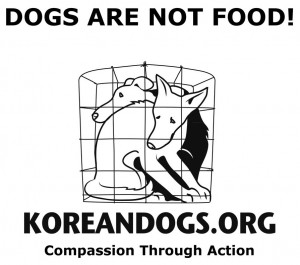 I have participated in close to 100 animal rights demonstrations. Most have focused on atrocities perpetrated against animals here in the USA. We demonstrate against fur, circus animal abuse, marine mammal captivity, vivisection, rodeos, greyhound racing, veal, and factory farming in general.

One of the ways to put pressure on the South Korean government to stop the torture and consumption of dogs and cats is to call for a boycott of the 2018 Pyeongchang Winter Olympics. We realistically do not expect the USA to not send a team. I know that I for one will completely ignore the games if things do not change now. During the 1988 Seoul Summer Olympics the dog meat restaurants were temporarily closed and the dog farms were hidden. Now we can use the internet and social media to expose the situation well ahead of time.

Animal cruelty is a worldwide problem that requires a worldwide solution. I would be thrilled if every Asian person in the world would speak out against the extremely cruel American veal industry for example.

I was hoping to gain the support of the students for the anti dog meat crusade, not offend them, and I am disappointed in the response. People should be offended by the cruelty itself, not the efforts to stop it. We will continue the uphill struggle to stop the torture and consumption of dogs. DOGS ARE FRIENDS NOT FOOD.
Please visit the website: www.koreandogs.org