posted by KoreanDogs.org team on February 9,2017 in News 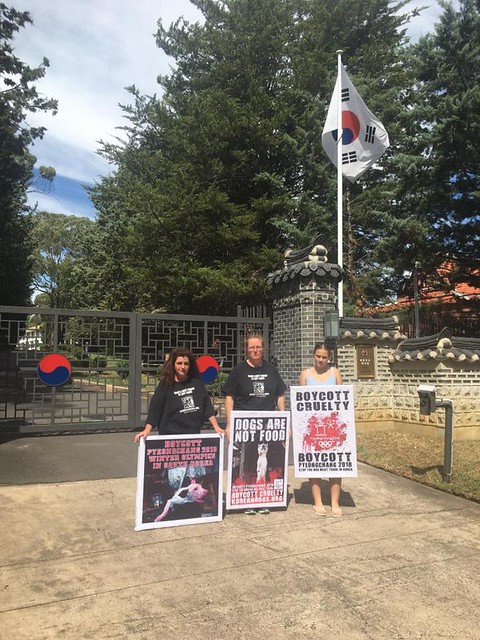 Sharing for Francie Campbell, the organizer of protest event in Australia on February 9, 2017.

Report card on the protest today :

Disappointments:
Unfortunately noone else turned up for the protest which was disappointing as we were could not do some of the things we had planned.
The south korean embassy also did not accept the petitions in person…this was always a possibility. ..so I will mail them this week.

Good things:
Awareness has been raised
And the guy from the embassy who took photos of our placards shared them when he returned to the embassy…..because a young korean girl who drove out of the embassy asked if we were ok on the heat…so it gave me an opportunity to speak to her…and she said she had seen the photos from our parliament house demo….and agreed it was an issue in her country and a difficult one…. asked her to help do all she could to stop this industry
Approximately 400 signatures from everyone signing….thank you for all your efforts!
And lastly…thank you to my friend Susan O’Brien…for all your hard work and lifting of heavy stuff in mid 30 degree temps….you are good!
And the fight goes on… 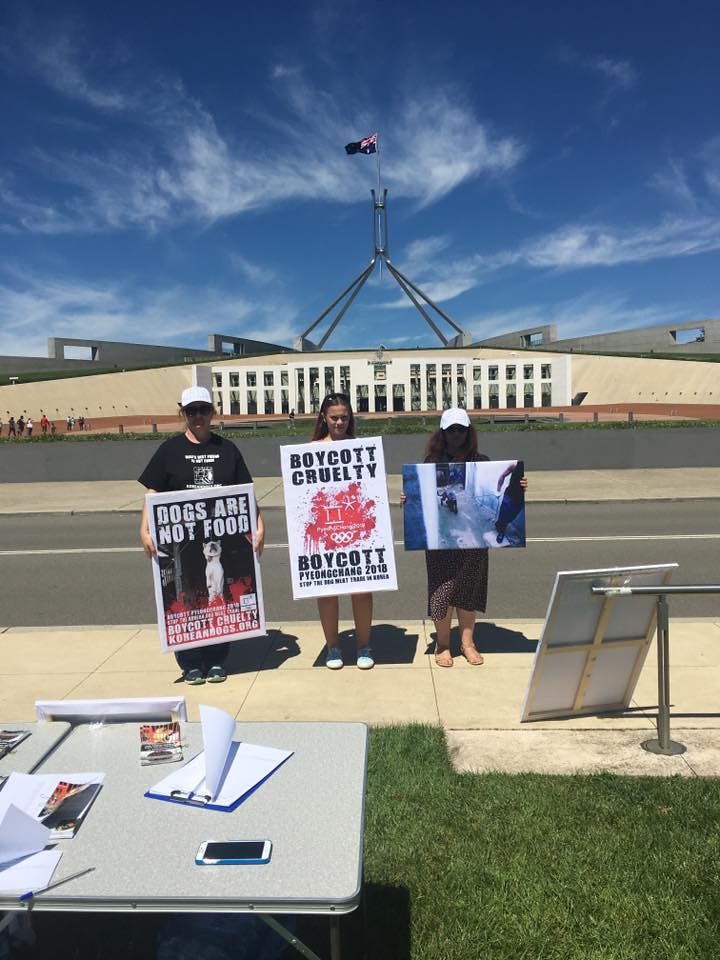 Quiet at parliament house….but we have set up….and many people are driving past and looking….some more signatures too…but the significant thing that happened was that a young korean man came along and started taking photos of the placards…I asked him if he was a policeman…he said no…I asked him if he was from the embassy ..he said yes….we then had a detailed discussion about this issue and the cruelty…the history of this industry…he agreed it is an industry that needs to end….I asked him if he would be there at the embassy this afternoon…he said yes….we talked about the history…the social reasons for this industry…he was defensive at times…and said at first the pics are emotive. ..and i said yes of course they are…..anyway he took a brochure and some pics. I asked him to sign the petition as well, which he did. Here he is… 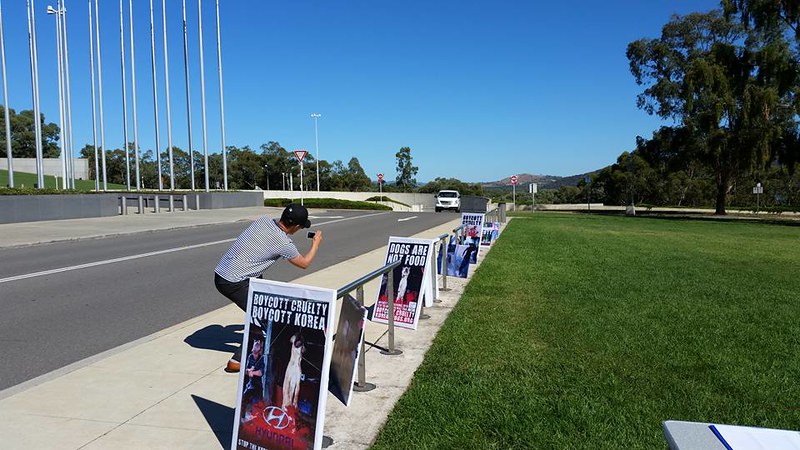 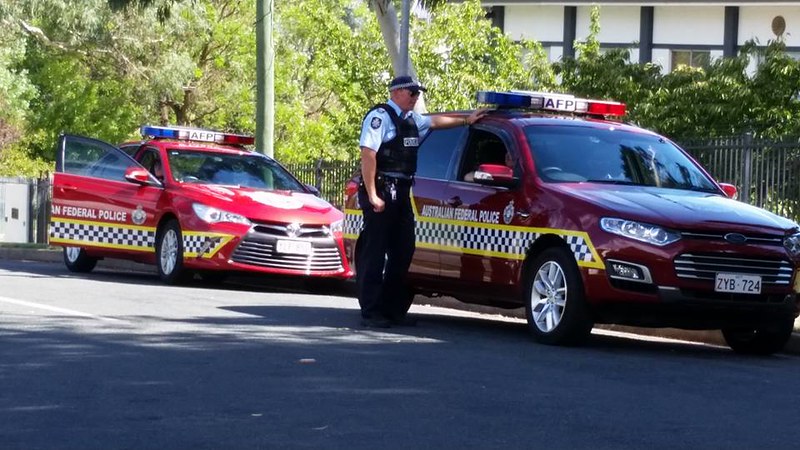 Spent 90 minutes at the civic plaza in Canberra…handed out approximately 50 more brochures, got a dozen more signatures, and 5 people want to come tomorrow to the protest ? 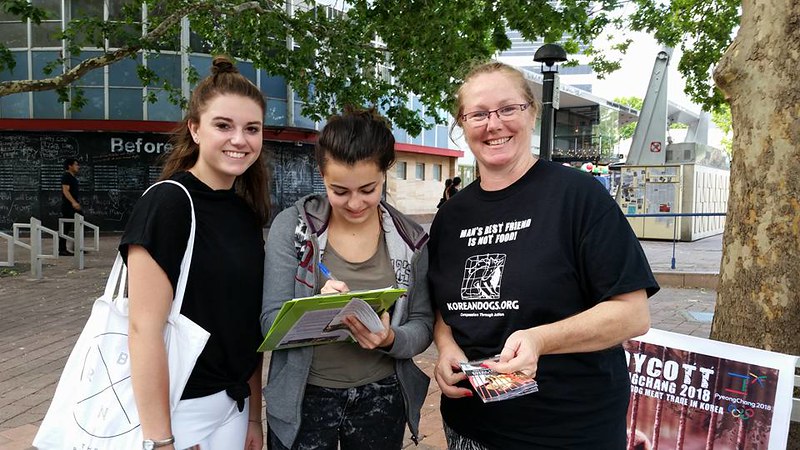 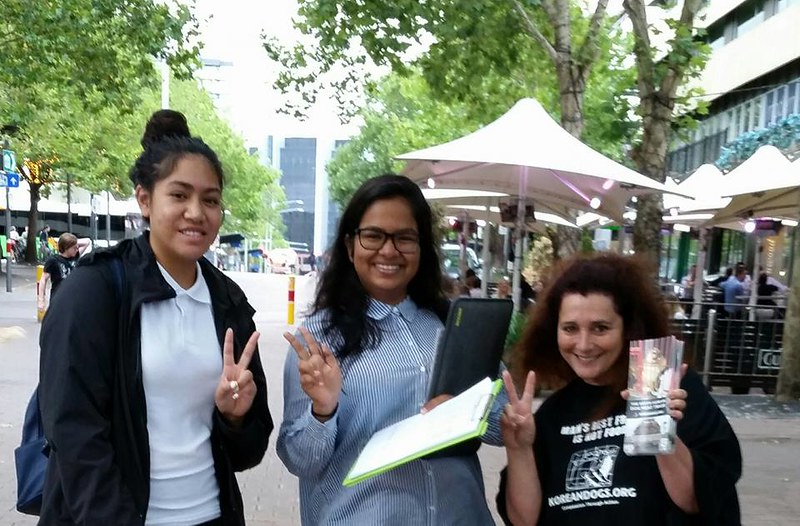 Anyone can take action to give a voice to the Korean dogs. If you live in the US and would like to organize an event in your city or simply want to hand out our leaflets to your friends, family, and neighbors, contact us and we would be happy to send you our campaign leaflets for free when you make $10 donation* to SaveKoreanDogs.

If you live outside of the US, please contact us about our leaflets, which we would be happy to send to you, but we regret that we would have to charge the shipping costs (please let us know which country you live in, then we can give you an idea of how much it would cost to send them). Thank you! Compassion Through Action!

*We are no longer sending leaflets out to US locations free of charge to discourage people who request them but do nothing with them; this is an unfortunate waste of our time and valuable resources (as we pay for these personally), and we hope that by asking for a small donation to SaveKoreanDogs (which goes towards rescuing and caring for dogs from the meat trade) this will help to make sure our leaflets are distributed and used for helping the dogs. Thank you for your understanding.

405 signatures sent off this morning to the South Korean embassy in Canberra – with this cover letter…..thank you all for getting these signed……..xxxxxx

Enclosed are hand signed petitions by people in Australia, in a wide range of locations, and well as a few from Bali, Indonesia.
The people who have signed this petition, along with myself, as protest organiser, request that you publicly record our protest regarding the cruel dog and cat meat trade in South Korea.

As you would know, over 2 million dogs are bred, and brutally slaughtered in the most horrific ways – electrocution, hangings, boiling alive, and other terrible means of torture. The methods and the industry itself is brutal, and horrendous.
You would also know that there are no real legislative powers to protect these animals from this life of misery and cruelty.

I respectfully ask you as the South Korean ambassador to Australia, that you do all in your legislative, social and personal power to put an end to this barbaric trade.
As your nation will be hosting the 2018 PyeongChang Winter Olympics commencing one year from today, I along with many others will boycott any products, services, and cultural programs – including the Winter Olympics – until this industry is shut down.

Your well respected corporations such as Hyundai, Kia, Daewoo, Samsung, LG, Korean Air, and others – all have ethics policies built into their corporate responsibility mission statements. Surely these statements must also include the welfare, protection and treatment of animals in your communities? I would therefore respectfully request that you also put pressure on your corporations to incorporate an ethos of caring for these creatures that live amongst your communities across your nation.

I would respectfully urge you to act now – as another 200 million dogs and thousands of cats will be brutally slaughtered this year. Please do not hesitate on this issue! Even today, dogs (and cats which are tortured for elixirs) are in torment, pain, and do not experience the normal and healthy life that sentient animals have a right to enjoy. Today in South Korea, many of these poor creatures will live a life of pain and torment, only to be brutally slaughtered in the most horrendous ways in order to be eaten. Please, help them!

I would also respectfully ask that you ask your government to put into place economic alternatives to your people who breed, trade, traffic and rely on dogs and cats for their income.

Lastly, I would respectfully ask that you would urge your government to put in place education programs – in schools and in communities to protect the welfare of these animals.

South Korea, as you know is the 13th largest economy in the world. As such you could be a first world country.

However, this barbarism has no place in modern civilised societies.
Mahatma Gandhi once said, “The greatness of a nation and it’s moral progress can be judged by the way it’s animals are treated”.

Please speak up and act for these creatures that have no voice.
Yours sincerely, 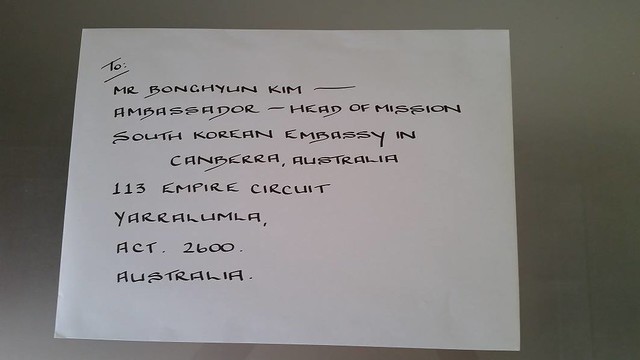