Home / Blog / Controversy over the maintenance of dog meat vendors at Moran market in Seongnam-city (The largest dog meat market in the country). Seven interdepartmental joint enforcement….Vendors backlash ‘threat to their livelihoods’.

Controversy over the maintenance of dog meat vendors at Moran market in Seongnam-city (The largest dog meat market in the country). Seven interdepartmental joint enforcement….Vendors backlash ‘threat to their livelihoods’.

posted by KoreanDogs.org team on September 10,2012 in Uncategorized 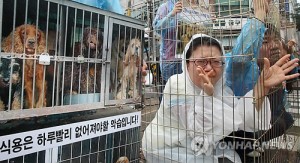 Vendors are up in arms as Seongnam-city in Gyeonggido-province launches a broad-scale maintenance of dog meat vendors at Moran Market.

Since July 5, Seongnam-city began an investigation of dog slaughter and sales conditions at the Moran Market area (Joongwon-gu, Seongnam-dong) and held several council meetings with directors and deputy mayor presiding.

Contrast to the way they have been responding to the demands of the animal protection groups in the past with the “Legal Blind Spot” excuses, this time the issue is being taken far more seriously.

In 2002 ahead of Korea/Japan World Cup, city has conducted a crackdown but it was at most a half-hearted gesture.

This maintenance moved forward based on the decision by the city that “while there are no legal provision to ban the dog slaughter and sale, we can no longer seat idle and watch the city’s image being tarnished”.

Moran market, well known as ‘dog meat market’, and its surrounding area is a home to some 21 health food related businesses including the dog meat sales and dog elixir(on the spot sales/processing) businesses.

During the peak summer season, each vendor slaughters and sells around 10 dogs for meat, and 2-3 dogs for ‘dog elixir’ (a popular local concoction made by boiling dog meat with herbs, which is believed to be good for your health) a day. In addition to dogs, they sell goats, ducks and chickens.

Through this investigation, the city conducted a detailed inspection of the conditions of dog storage and dog meat display/sales.

The investigation found that the dog cages and the display shelves are occupying the road and the sidewalks without permission and the vendors are displaying the dog meat outside on market days causing people to feel disgust.

There were also suspicions that some vendors were disposing by-products of slaughter in garbage bags, or letting part of it flow down the drain.

Noises generated from the blowtorch during the slaughter process measured in excess of 60dB in the adjacent residential areas of these businesses.

However, due to the legal gap related to the dog meat, it is difficult for the city to impose any real controls.

This is due to the fact that dogs were excluded from the livestock classification during the 1988 Olympics in Seoul conscious of the global public opinion but the related law has not been properly revised.

Accordingly, the city has decided to tackle the issue of ‘disgust feeling’ first and demanded that vendors voluntarily remove the dog cages from the street and the sidewalks.
Moran Livestock Merchant Association responded “The removal of dog cages will directly affect our livelihood. If this crackdown is enforced, we will respond aggressively.”

They explained “Intestines are boiled and disposed of as food waste, several places have reduced noises by installing panels, odors are eliminated by administering EM (Effective Microorganism) culture fluid and slaughtering is being done behind the screen using the electrocution so there is no animal cruelty”.

Gang-Choon Lee, the president of Moran Livestock Merchant Association stated “Dog cages are located in spaces not used by people and singling us out while other businesses are in doing the same is not fair to us.”

President Lee argued “With the 40 years history of Moran Market, if the dog meat was to be missing it’s like the tradition is disappearing. If the city insist on crackdown they should offer us a fair compensation to induce closure of our businesses. It is not right to treat us as if we are criminals using the excuse of crackdown.”