posted by KoreanDogs.org team on January 22,2015 in Action Alert, Campaign

CompassionWorks International assists activists and organizations across the United States and worldwide by providing advice, literature, branding, posters, and online support in order to make effective and efficient change for animals. KoreanDogs.org will soon be added to the group of causes that are promoted. These include circus animal cruelty, marine mammal captivity, puppy mills, rodeo, greyhound racing and vegan activism. We are grateful to CWI Executive Director Carrie LeBlanc and CWI Creative Director Adam Sugalski for their compassion and leadership. www.cwint.org 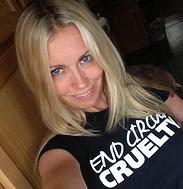 Carrie has been a leader in the animal protection movement for several years in the areas of nonprofit management and fundraising. She has worked alongside many notable organizations including Compassion Over Killing and Darwin Animal Doctors, and was formerly the Director of Operations for Mercy For Animals. During her career, Carrie has successfully raised millions of dollars, helped to restructure and stabilize several nonprofit organizations, and has consulted for or advised over a dozen nonprofits focused on animal protection.

An animal activist from a young age, Carrie became vegetarian shortly after graduating from high school and went vegan twenty years later after learning of the tragic plight of male chicks hatched into the egg industry. A year after becoming vegan, Carrie founded Go Vegan USA, a project focused on community-based activism, and ran the founding chapter in Santa Barbara, California. Amongst other activities, Carrie co-founded the Animal Rescue Fund of Santa Barbara, has been a board member on her local chapter of the Association of Fundraising Professionals, and has published several articles related to veganism, nonprofits, and fundraising.

Carrie holds a bachelor’s degree in cultural anthropology and a master’s degree in art history both from the University of Massachusetts, Amherst, and is a published art historian. She currently lives in Henderson, Nevada where she enjoys spending time with her three rescue dogs, training Muay Thai or practicing yoga, and questing for the ultimate vegan cupcake 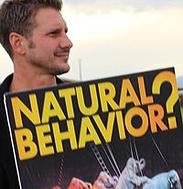 Adam has been fighting for environmental and animal rights for over two decades. As a teenager, he began a recycling program at his high school and also helped to found the Environmental Club. Upon graduating with a BA in Art and Photography from the University of North Florida in 1996, Adam completed his first pro-bono assignment: creating a logo for Earth First. In the years that followed Adam has assisted numerous local and national nonprofits dedicated to animal protection including Mercy For Animals, Vegan Outreach, and Animal Legal Defense Fund. He is also a founding member and board member of Four Feet Forward, a nonprofit that provides professional services pro-bono to animal advocacy organizations.

In 2011, Adam organized JaxProtest, a circus protest group in Jacksonville, Florida. Under his leadership and because of his community-building skills, the protest group grew from 18 protestors attending Ringling demonstrations to over 60 in just one year. In addition to staging successful protests, JaxProtest initiated talks with the president of the University of North Florida regarding circus cruelty after holding a successful protest against Piccadilly Circus on the UNF campus in July 2012. By civilly and strategically engaging with UNF officials in an on-going dialogue, UNF, in step with other universities across the country, ultimately decided to ban animal acts from campus. Outside of his work in animal protection, Adam is an award-winning graphic designer, an avid surfer, and a Muay Thai instructor. He lives in Jacksonville, Florida with his three rescue dogs and two adopted cats. 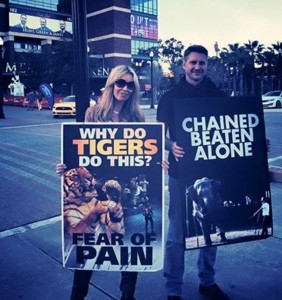