We have received a response on April 20, 2017, regarding our Sister City Campaign with the Samcheok, South Korea, and Town of Leesburg, Virginia. Official Facebook for the Town of Leesburg responded by stating that they do not have an official Sister City relationship with Samcheok.

Our Sister City Campaign had been launched based upon information obtained from Governors Association of Korea and the homepage of Samcheok.

With this confirmation given by Town of Leesburg, we will now close our Sister City Campaign, and online petition.

We extend our gratitude to the leadership of Town of Leesburg, for responding to our petition so quickly. We also send our heartfelt thanks to all in support of our work, who have taken action to speak out against the cruelty to dogs and cats in the Samcheok. 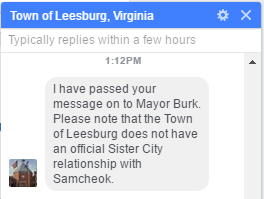 Below is our response thanking Mayor Burk and the Town of Leesburg:

I would like to thank you and the Town of Leesburg for responding to our concerns raised via the recent petition on Change.org about the mistreatment, torture and consumption of companion animals in Samcheok, South Korea.

And thank you for informing us that Leesburg does not have an official Sister City relationship with Samcheok. It is best not to be linked to a city which is notorious for their cruelty to companion animals. We have updated our supporters who have signed our petitions as well as our campaign page.

Again, we thank you, and hope you will follow our efforts in changing the perception of dog and cat eating nations, like South Korea. We are a “grass roots”, hands-on group of people who dedicate ourselves to ending the cruelty and atrocities in the dog and cat meat trade. We continue to work, not for profit, but with love and compassion, for the Korean animals.