posted by KoreanDogs.org team on March 1,2017 in News, Uncategorized

On May 9th, there will be a Presidential election in South Korea. This is following the final ruling by the Constitutional Court on March 10 which upheld a decision by the country’s National Assembly to impeach President Park Geun-hye (the first female president in Korea) over alleged corruption.

Right now in Korea, the presidential hopefuls’ campaigns are in full swing. The unchallenged front runner in the poll is Mr. Moon Jae-In and he is the most likely candidate to strengthen the Animal Protection Law and help the animals in Korea. We support him and his pledge to lead his nation into a more ethical and compassionate society by improving the welfare of animals.

Mr. Moon Jae-In has posted a story about a stray dog who came into his life and what he had learned from that experience. Below is translation of a story shared on Moon Jae-In’s official blog on February 2, 2017. 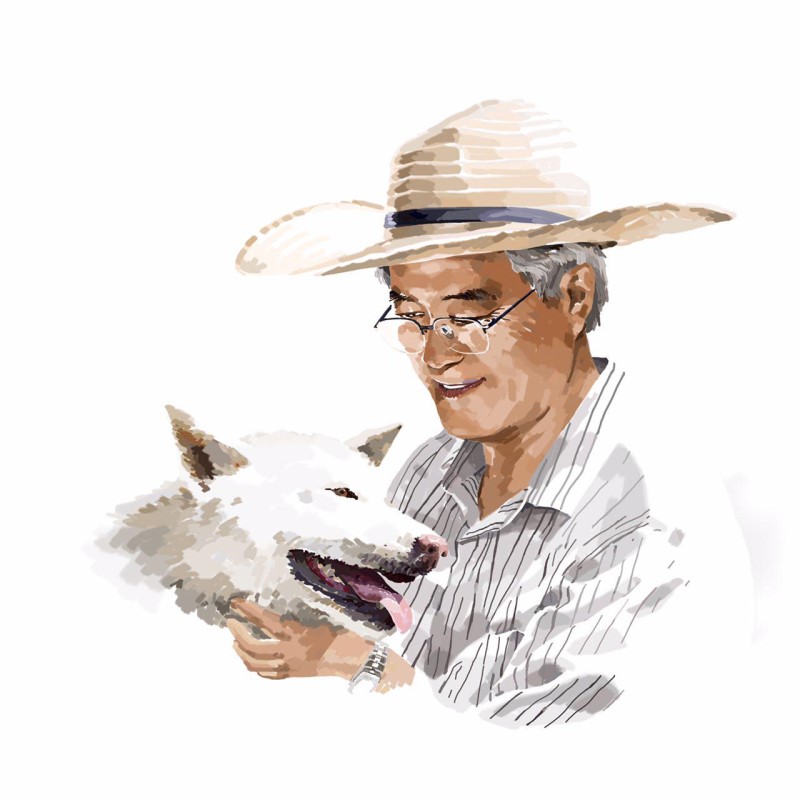 This is a blog post from 2012 when Moon Jae-In was a candidate for president in the 18th Presidential election.
At the time, Mr. Moon pledged plans for animal protection, such as the strengthening of the Animal Protection law. 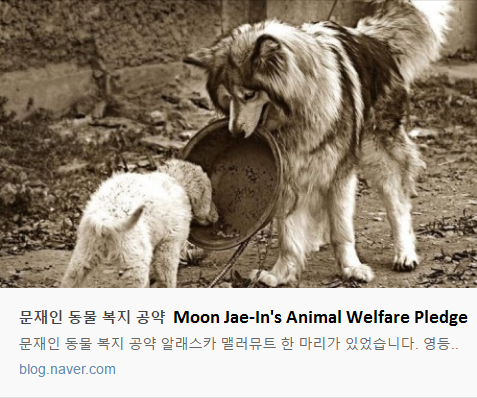 Mr. Moon’s pledge for animal welfare wasn’t something that his policy team created for him.
This policy came about because Mr. Moon is someone who has always loved dogs.
In December of 2015, Mr. Moon posted on his Facebook page, “The story of a stray dog.”
The story is about a stray dog named ‘Jisoon’ and his pet dog ‘Maru’ and their love, and finding homes for the puppies born between them. We would like to share that story with you.

Last July, I tweeted about the news that our dog had puppies.
The mother dog ‘Jisoon’ used to be a stray who was wandering around the outskirts of the village.
This dog, who looks like a mutt with a mix of brown Jindo dog, was so afraid of people that she never came close.
Even when she sees people from a far distance, she would run away.
The place where she usually hangs out was in the mountain behind our village.
When I take a walk, i would often see her from a distance, wandering around.
People called her a wolf dog.
I cannot remember when, but one day she started to visit our yard. It was to visit our male dog, Maru.
When I wake up in the morning and go outside, I would often see her standing next to the pan around Maru’s kennel, and then quickly run away.
I found the hole where she escapes and blocked it, but it was of no use.
In a not well constructed fence, she quickly found other holes.

Then one day, while we were taking a walk together on the mountain behind our village, Maru had found something.
Near the entrance to the walking trail, there was a pavilion, half-built and never completed, from a long time ago.
It is a place where I usually pass, without paying much attention, but when Maru started acting strangely, I looked inside and saw that there was a gap barely big enough for a dog to pass through under the floor where there was a cave-like space deep inside it.
And my goodness!
There were six to seven puppies less than a month old inside.
When I saw that, I could not help but worry about them.
I went there a few more times, but the mother dog could not be found, perhaps looking for food. Only the puppies welcomed the people.
It was dangerous to leave the puppies there alone.
After weaning, it would not be easy for the mother to find the food to feed them, and if the puppies went out of the cave, they may get lost or harmed by wild animals like weasels.
“What should we do?” My concerned daughter eventually brought all the puppies to our home.
Then we took care of the puppies until they were able to eat solid dog food and found homes for them with our neighbors.
The people in the village took care of the stray puppies.

Since we brought her puppies, Jisoon came even more often and took care of her puppies when people were not around.
As I had guessed, Jisoon was the mother.
The fact that she gave birth to her puppies and raised them all alone in the cave, was amazing.
The puppies were distributed to the neighbors, and as they grew, it became clear who was the father of the puppies.
The puppies were either white or brown, and the white puppies surprisingly resembled our dog Maru, who is a ‘Poongsan Dog’.
I do not know when it happened, but our dog Maru was their father.
It turned out that it was our responsibility to take the puppies and take care of them, after all.

As her puppies had all gone, Jisoon came to our house even more often as if it was her home, and circled around Maru.
She was still afraid of people, so when she sees a person, she would run away and go back to Maru.
She loved Maru, and faithfully followed him around.
When I would take Maru for a walk, she would appear out of nowhere and always follow us from a distance.
Even though she ate dog food which was left out in the yard, she would often startle us by bringing animals she caught such as weasel, baby elk, and rabbit.
She would hide these animals somewhere and eat them. However, what is surprising was that she would not eat them by herself, but she would bring the meat for Maru.
Jisoon’s devotion and love for Maru became well- known among the neighbors.
That’s how she got the name ‘Jisoon’(지순) which means ‘absolutely pure’ in Korean, because of her absolute love for Maru.

Yet, there was a problem.
Jisoon was going around attacking the female dogs in the village.
Strangely, she left the male dogs alone and only attacked the female dogs and sometimes the injury was so severe that it almost killed them.
People in the village thought that she was just a jealous female who wanted to keep Maru for herself.
Eventually, we decided to catch Jisoon and send her to the animal shelter.
After the discussion, we reported her to the 119 rescue team and captured her with an anesthetic injection gun.
When we captured her, we saw that she was still wearing the collar that was put on as a puppy. When her neck got thicker, the collar pierced deep into the skin, causing wounds that were severely infected.
The animal shelter said that they had no choice but to euthanize Jisoon because adoption is impossible in her condition.
We ended up not sending Jisoon to the animal shelter, but to the veterinary hospital for surgery on her wound.

After the wound healed, we had to capture her again and take care of her.
However, she was so clever and agile that we could not catch her.
We tried to entice her with food, corner her with several people, even tried tranquilizer and sleeping pills prescribed by a veterinarian, but none of it worked.
Even when she seemed to have fallen asleep with the tranquilizer, when peopled approached she ran way frantically.

Finally, what captured her was a method that was beyond our imagination.
While our family was out, leaving Maru in the yard unleashed, Maru and Jisoon were copulating. When our family returned, Maru dragged Jisoon into his house.
Jisoon, captive in the dog house, became pregnant and gave birth to a litter of puppies.
Another amazing thing is that through those puppies, we were able to find out who the father of Jisoon was.
Among 7 puppies, 3 puppies were brown and 3 puppies were white like the mother and father’ colors.
However, one was totally unexpectedly ‘4 eyes’ Jindo dog with black fur.
He was a rare breed of Jindo which has black fur with a white spot above the eyes which makes it appear to have four eyes.

We had a dog named ‘Kam’, a companion to Maru, who I had left with my neighbor while I was running in the general election and he was a ‘4 eye’ Jindo.
And there were no other ‘4 eye’ Jindos in the area.
Therefore, we knew that Kam was the father of Jisoon.

All seven puppies grew up in good health and as I promised on the tweet, they were all distributed on a first come, first served basis to applicants from Seoul, Busan, and Yangsan.
When you see how the stray Jisoon was able to reproduce, we don’t know how her puppies will again reproduce.
If we think about it, there is no life in the world that is not precious.
Through stray Jisoon and her puppies, I think about the preciousness of life and the mystery of destiny/relationships/fate. 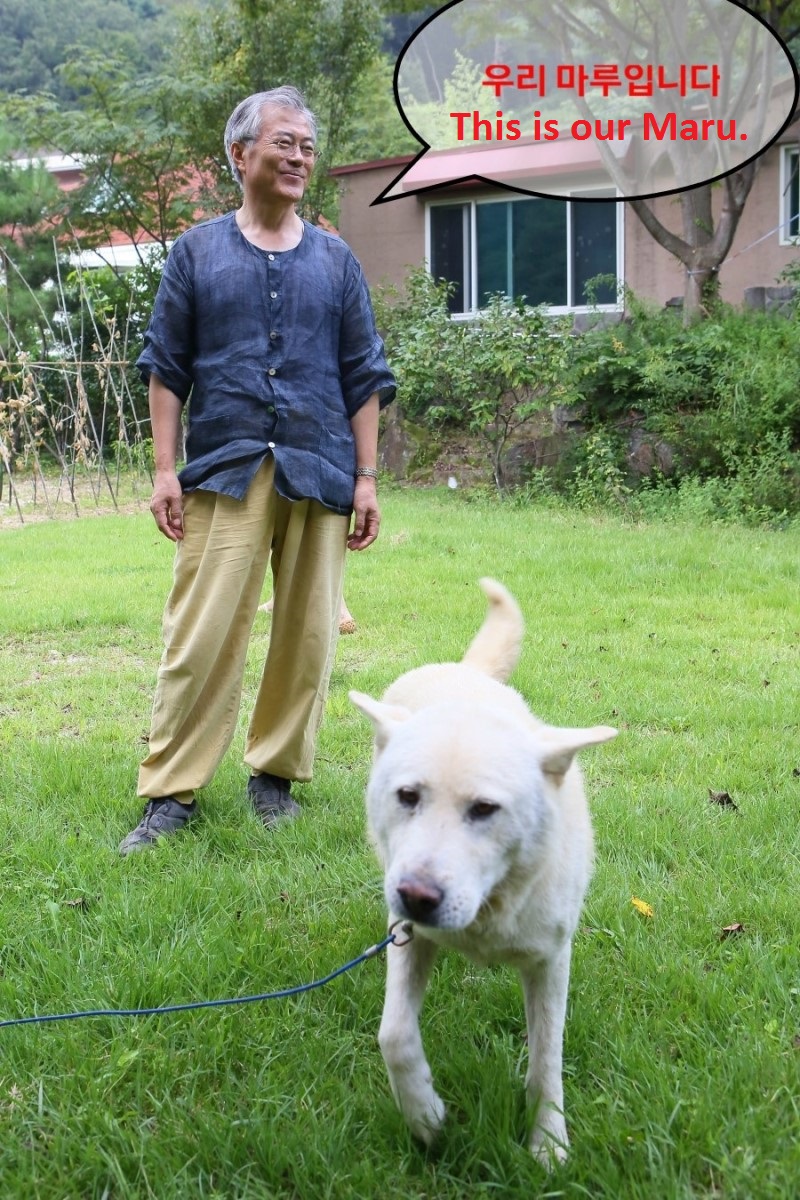 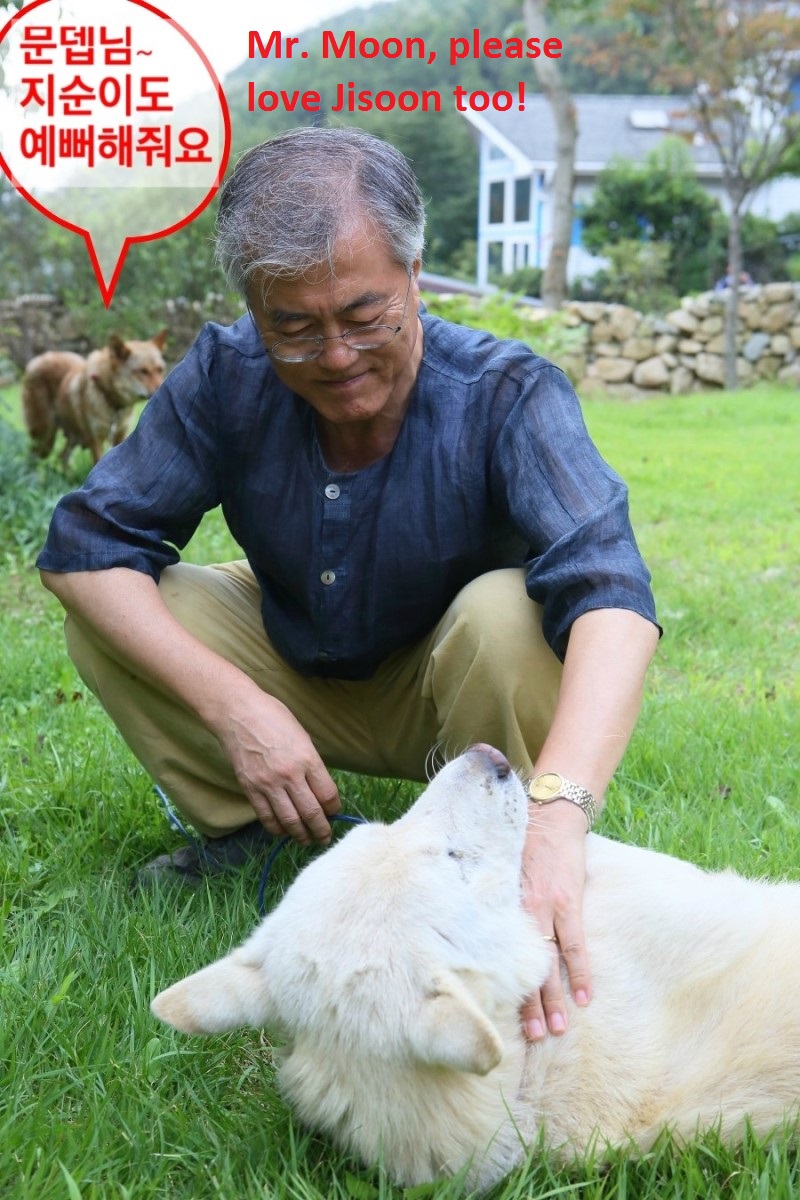 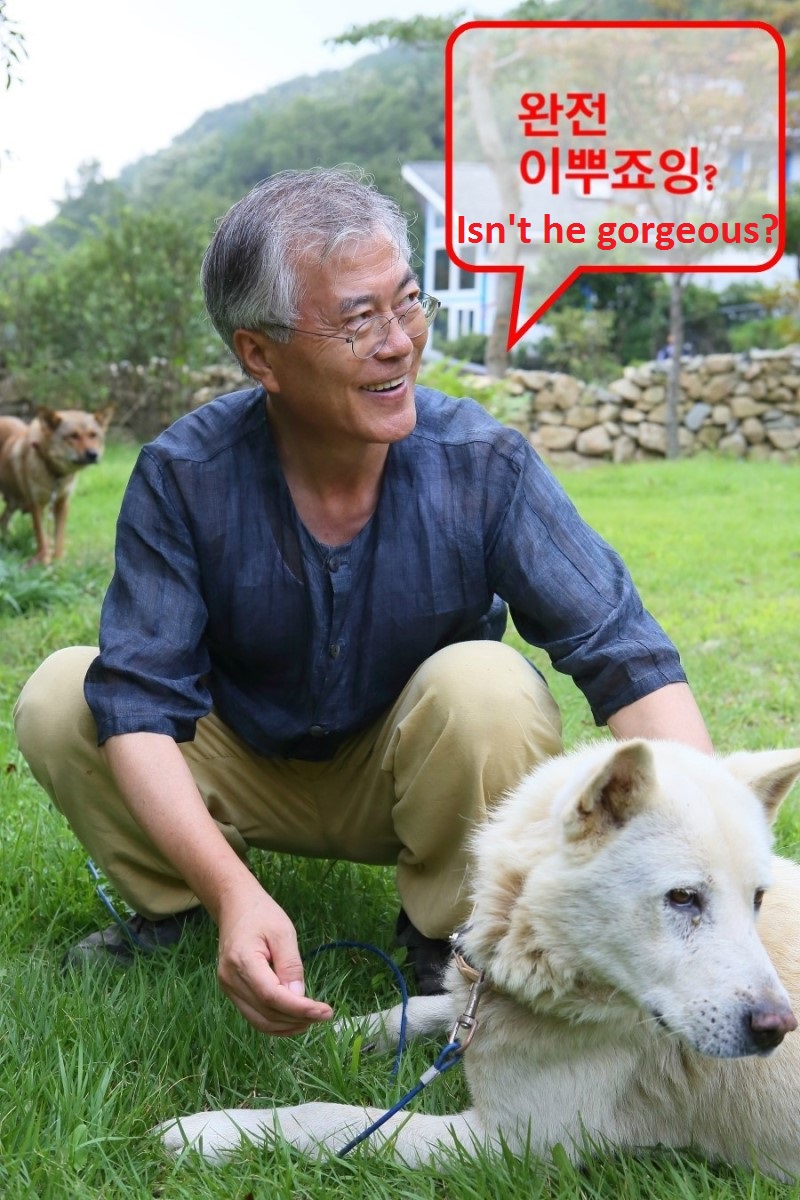 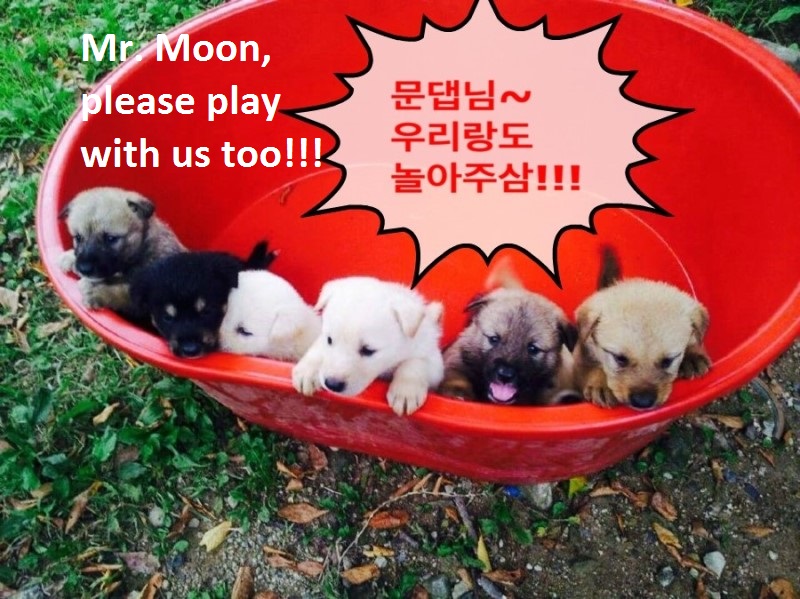 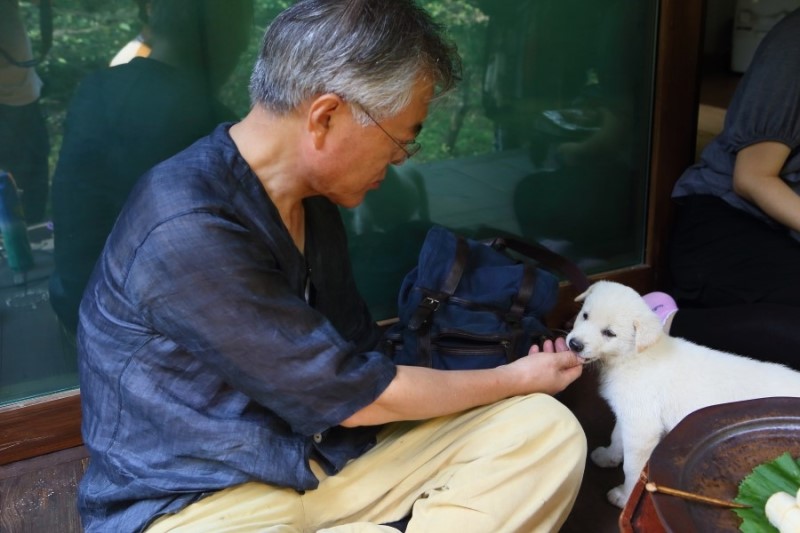 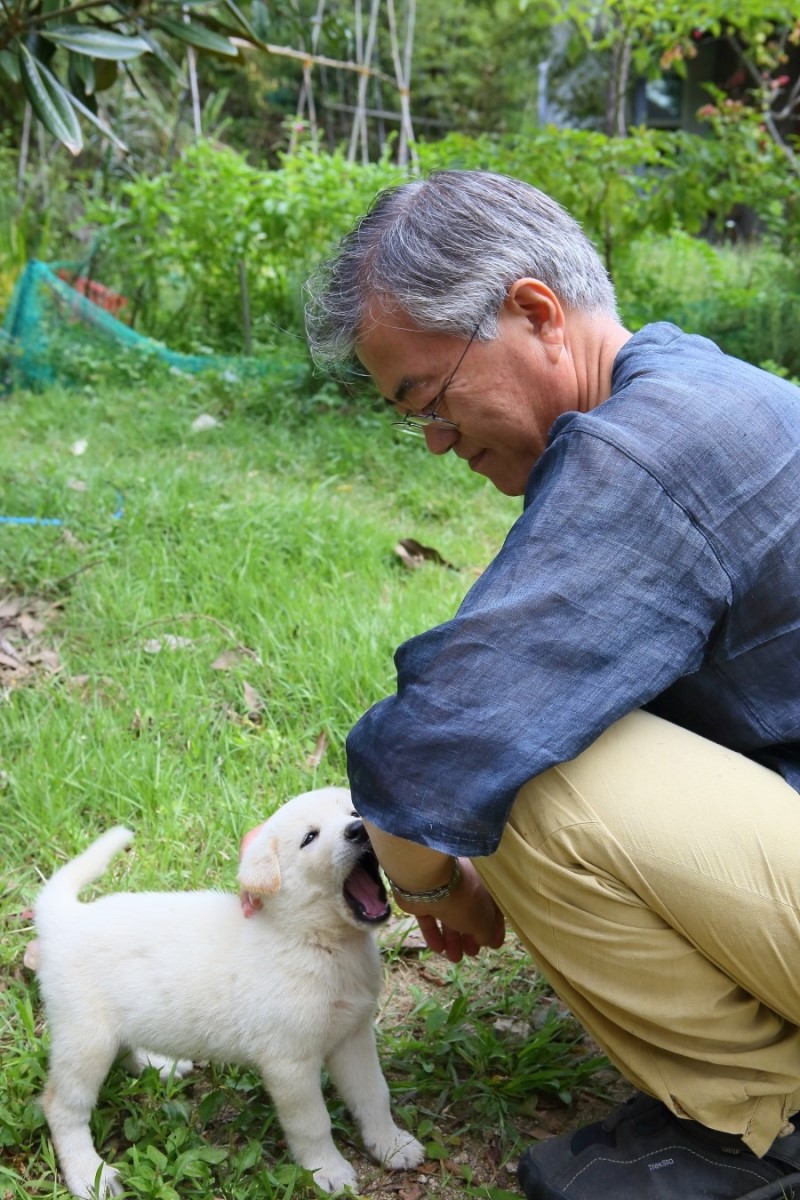 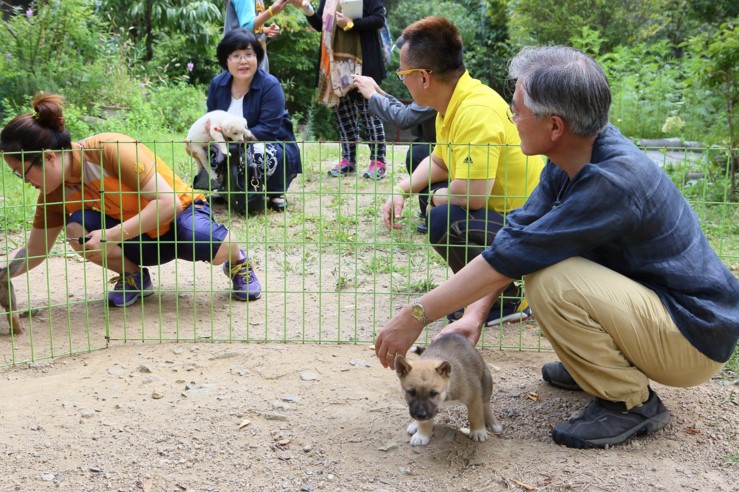 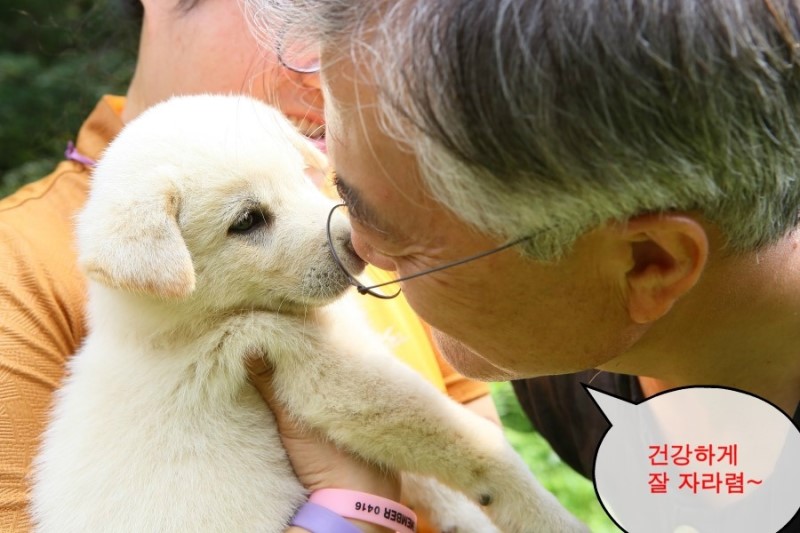 Mr. Moon does not just love dogs.
Professor Yu Hong-Joon, author of “My Heritage Exploration”, said that Moon Jae-In loves trees, and his knowledge of wild flowers is on a professional level.
It’s to a level where he visits all the arboretums around the country.
The reason why he often climbs mountains is to see the trees and the grass.
We became close because we have similar hobbies.
There was a tree which looked like it was dying in his house in Yangsan. It looked as though it wasn’t going to live, so I told his wife, Kim Jeong-Sook, “Wouldn’t it be better to just cut it down?”. Then she replied, “No. I thought about that too, but I saw my husband holding the tree and talking to it saying ‘Tree, please get well soon and grow. If you don’t, my wife will cut you down. We cannot let that happened. Can we? Get well soon.” 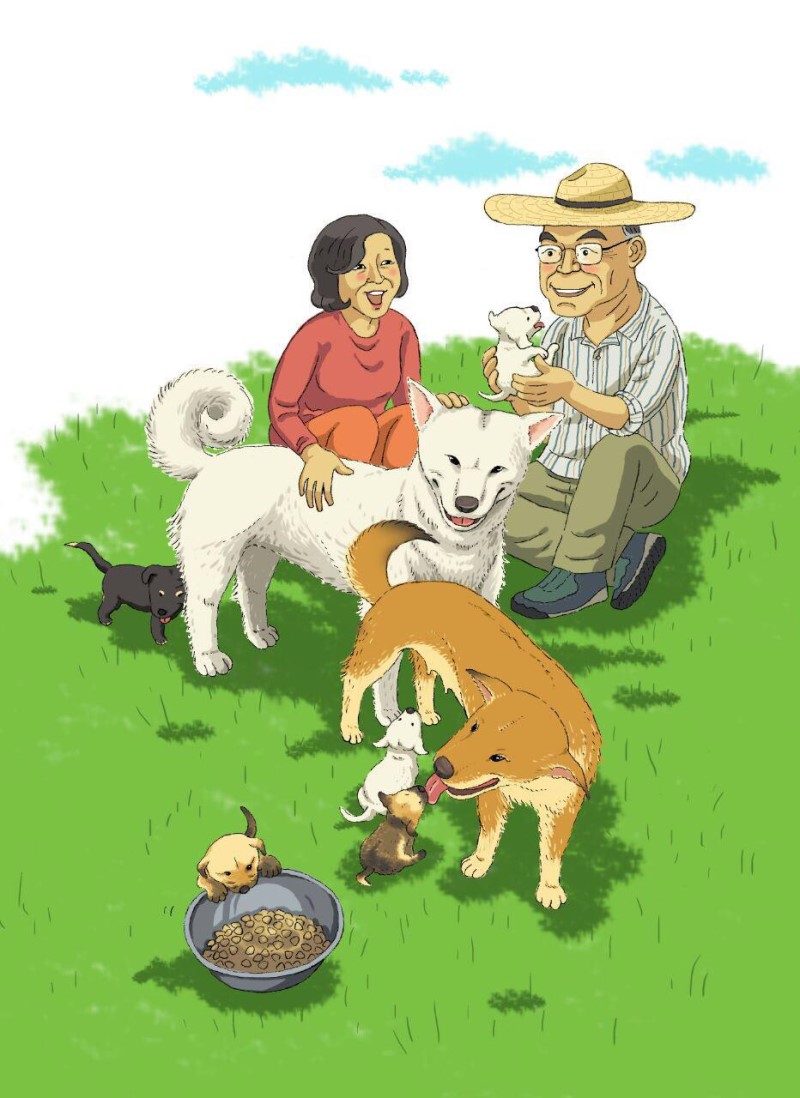 Moon Jae-In loves not only dogs and cats but even the plants.
You can watch tonight at 11pm SBS [Presidential Candidate Interview]. 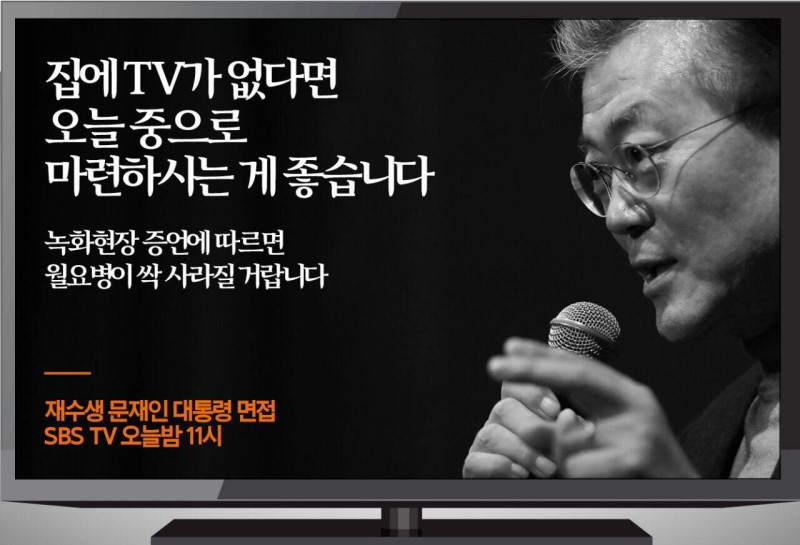 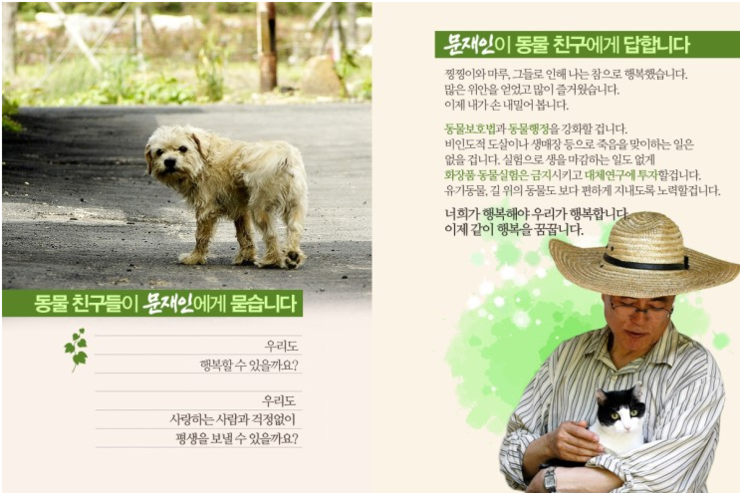 Our animal friends are asking Moon Jae-In:
Can we be happy too?
Can we live our lives without worries, with the people who love us and we can love in return?

Moon Jae-In responds to animal friends:
I was happy because I had companions like Jjingjjing and Maru.
They gave me much comfort and joy.
Now, it’s my turn to help them.
I will strengthen the Animal Protection Laws and Animal Administration.
There will be no more cruel slaughter or burying alive of animals.
In order to stop the animals being killed in laboratory testing, I will ban all animal testing in the cosmetic industry and I will invest in researching the alternatives.
I will try to improve the lives of abandoned and stray animals.
You must be happy before we can be happy.
Now together, we may dream of happiness.