posted by KoreanDogs.org team on January 7,2017 in News

The South Korean government is finally feeling the heat from the global campaigns against the inhumane dog and cat meat industry. The many years of hard work by animal rights activists and organizations both within Korea and abroad seem to be paying off, even if the ultimate goal of banning the sale of dog meat has not yet been reached.

On December 26, 2016, the Korean news organization ‘Animal Doctor’ reported that the government is making some significant changes and improvements to their laws governing treatment of companion animals. This is welcome news and a victory, and proof that our campaign is working. It also encourages us to fight even harder to ban the cruelty of the dog and cat meat industry.

See below for the changes as reported by ‘Animal Doctor’:

Korean government announces a new policy to foster protection of companion animals. An “Animal Welfare Team” is to be created in the first half of 2017.

The Korean government is introducing a new police team dedicated to animal protection as well as a “pet-parazzi” program (reporting animal cruelty). Violations will result in up to 2 years of imprisonment or a fine of up to KRW 20,000,000 ($17,000 USD).

Details on the policy for companion animal protection and the promotion of related industries. 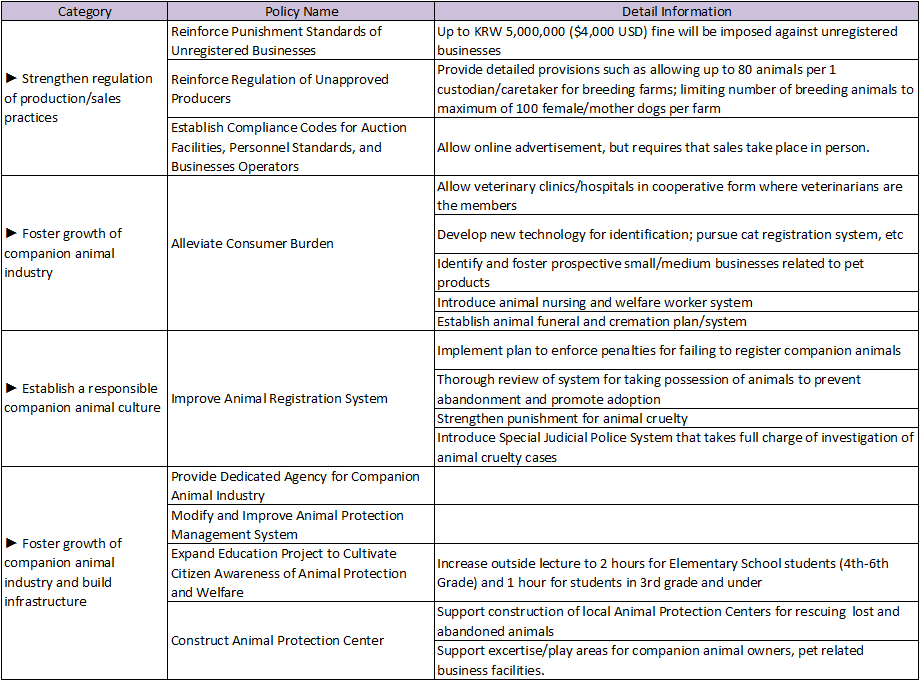 This plan, which was reported on December 14, 2016, removes controversial terms such as “Animal Nurse” and “Veterinary Tech” and replaces them with the new title of “Animal Nursing and Welfare Worker.” In addition, the plan allows cooperative form of veterinary clinics/hospitals with veterinarians as co-op members and prohibits anyone without a veterinarian license from opening any type of animal hospital.

The key change in the new plan is that the monetary fine for selling animals or acting as an auction agent without proper registration will increase up to KRW 5,000,000. The plan also puts in place a ‘license system’ for the animal production industry, establishes industry regulations for related facilities, and creates personnel standards.

The production of animals will be managed through detailed provisions allowing up to 80 animals per 1 custodian/caretaker for breeding farms and limiting the number of breeding animals to a maximum of 100 female/mother dogs per farm. Unlicensed businesses will be offered a grace period to either comply with the new animal protection regulations or convert to a new business.

The regulations on the sale of companion animals will be made stricter through compliance requirements for auction facilities, personnel standards, and business operators, as well as setting out standards for selling animals online.

The main objective of this law is to address the need for the government to regulate the production and management of companion animals to prevent the proliferation of “puppy mills” that created a major public outcry in 2016. However, there is also concern that this new law will cause restrictions regarding animals bred in livestock farms.

The primary focus of this plan to promote the companion animals industry lies in the requirement that veterinarian hospitals must be in the form of cooperatives where veterinarians are the members. By insuring clinics are veterinarian founded and owned, unlicensed persons will be prohibited from operating a veterinary clinic. In addition, the terms “vet technician” and “animal nurse” will be replaced with “animal nursing and welfare worker.”

The government has also announced plans to establish service industry requirements in the areas of grooming, boarding, and transportation. In order to maintain equanimity with other businesses, registration by the service industry will be required and related standards will be provided.

The animal funeral/cremation industry has become very popular and the government has plans to regulate this industry by establishing restrictions, guidelines, and standards for the building of public animal funeral facilities and restricting the number of incinerators at cremation facilities.

Cats will be included in the Animal Registration System.

To promote adoptions, the government is extending the length of time animals will be cared for in shelters. They are also reviewing plans for local governments to take possession of and protect companion animals surrendered by owners. Punishment for acts of animal cruelty will be strengthened.

A new system of “Pet-Parazzi” and “Animal Protection Police” will be implemented to prevent animal cruelty, and a dedicated Special Judicial Police Unit will be investigating animal cruelty cases. For those cases reported by Pet-Parazzi, punishment upon conviction will be strengthened to up to 2 years of imprisonment or a fine of up to KRW 20,000,000.

This support for the promotion of the animal industry is expected to be more active than ever before with the earmark of KRW 69,000,000,000 towards building play and exercise areas specifically designed for companion animal owners as well as subsidizing pet-related businesses.

“We are actively working to provide for an action plan for the Animal Protection Act Enforcement Ordinance and Enforcement Rules, and will amend the plan as necessary per feedback from the stakeholders,” a government spokesman stated, adding, “we will work closely with other government departments to make it possible to amend laws/rules that are under the jurisdiction of those departments.”

The Government’s strong desire for the protection of companion animals and the growth of related industries is evident in their announcement that they will create a group tentatively titled the “Animal Welfare Team” within the Ministry of Agriculture, Food and Rural Service in the first quarter of 2017. The impact of the government’s commitment to the companion animal industry and its promotion is expected to reach the animal industry in general as well as the veterinary industry.