posted by KoreanDogs.org team on August 12,2017 in Boknal, Demonstration, The Animals' Battalion 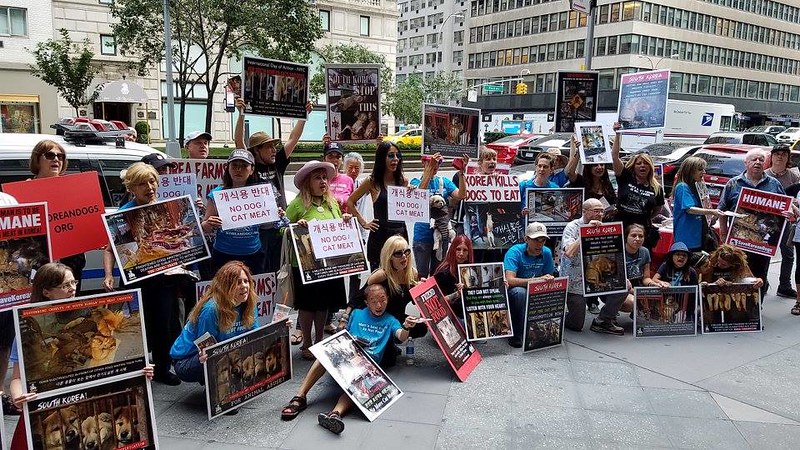 The Animals’ Battalion held a series of demonstrations in New York City, for the third year in a row. They demonstrated outside the South Korean Consulate, to make that government aware of how strongly we abhor their indifference to the mass cruelty and suffering inflicted on sentient animals, within the dog and cat meat trades; and also of the failure of their government to bring about an end to this evil trade which makes profits from the suffering of animals.

Friday, August 11, was Day 3 and the last demonstration for this year. Thank you to The Animals’ Battalion for organizing this demonstration, especially Noelia and Roberto and all the dedicated animal advocates who came to help. We are thankful to Susan who has helped with promoting this event by sponsoring an advertisement in the local Korean American newspaper inviting Korean Americans to help out, in reading the statement to the Korean government and leading the chants in the Korean language.

The time for this event was changed to extend through 6pm in an effort to get a hold of the Consulate General Gheewhan Kim. The demonstrators had succeeded. Noelia had asked him about the promise he made at last year’s demonstration, about delivering their message to the Korean government. The Consulate General said that he had. When the activists asked for further comments, he was captured on video saying that he supports our campaign and that he has a rescued dog at his home.

How many years do these activists have to come back before the Korean government officials take this issue seriously….??? One thing for certain is that the New York Korean Consulate staff have been put under pressure by the dedicated activists who spoke out for the Korean dogs and cats throughout this event. We hope they are embarrassed about their nation’s profound indifference to this cruel and shameful practice and that we don’t have to wait too long for the Korean government to act.

“We would like to thank every single person who came out to protest dog meat eating on Boknal-both yesterday and throughout the 2017 season. Thank you for raising your voices and making your presence felt. We finished strong yesterday-even getting to speak to Consul General Gheewhan Kim again yesterday. We also want to take a moment to than the efforts of those who made these events stronger. Susan Song- for being our superstar liaison with Korean media and leading chants and speeches in Korean. Rachel J Levy Ejsmont for all her help transporting the “protest gear”. Tommy Ivors for always being a helping hand in getting the show started and helping us pack everything away. Andrew Enseñat did a wonderful job supervising the table and getting the public to sign petitions and take fliers. Of course, our unending gratitude to our dear friend, Giny Woo of KoreanDogs.org for her spearheading this issue. I also would like everyone to know, you can still help fight the dog/cat meat trade by supporting rescues like koreank9rescue.org and please remember we have House Resolution 401- urging the US to condemn the dog/cat meat trade in various countries and H. Res 1406- banning the dog/cat meat trade in the US, which need to be lobbied for. Please contact your representatives and urge them to support these resolutions. For more information on them, please contact and support Citizen Lobbyists for H.Res. 401 (formerly H.Res. 30+752) to end the DCMT- who are spearheading the campaign to have these resolutions enacted.” 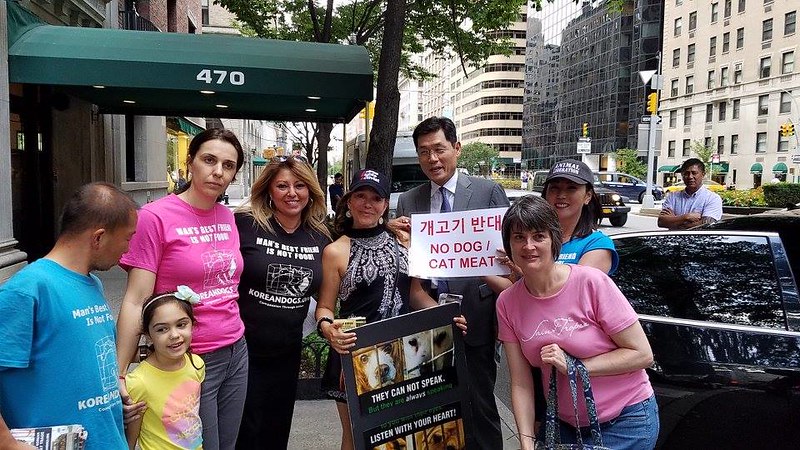 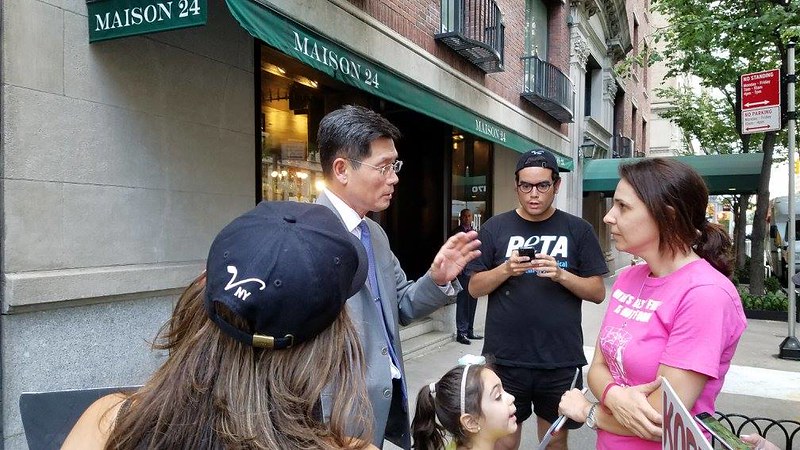 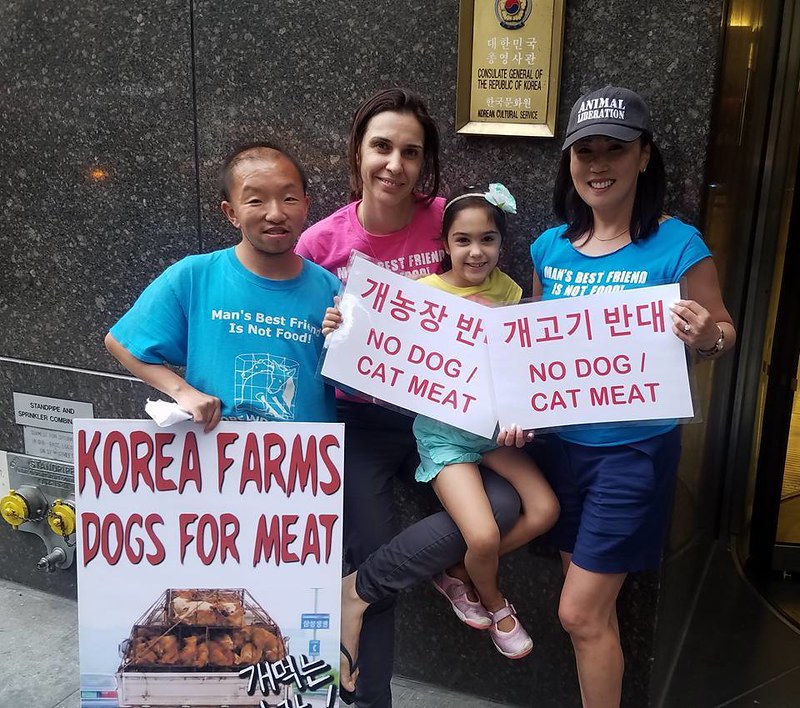 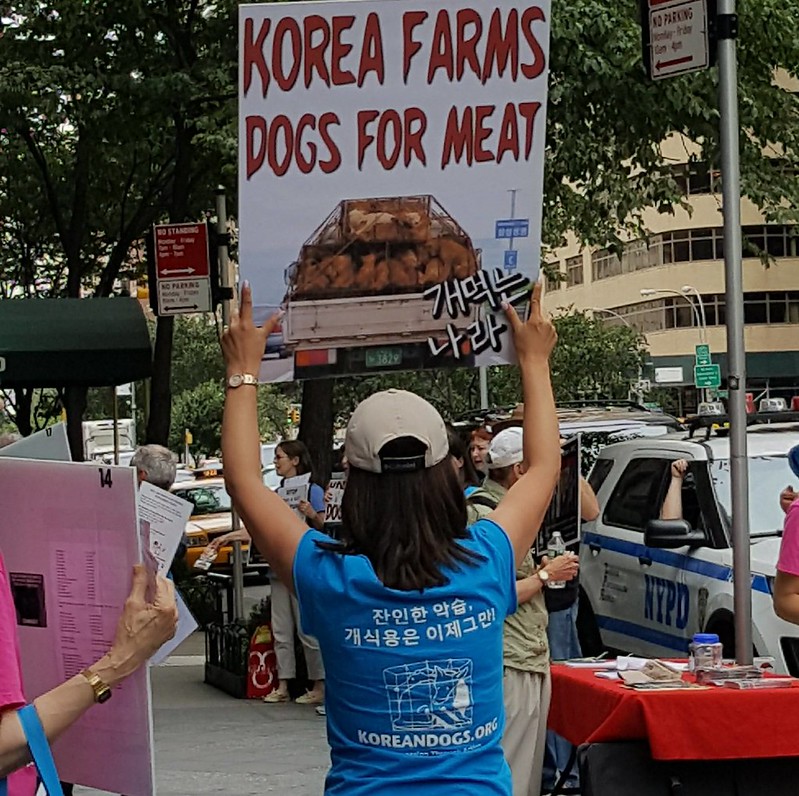 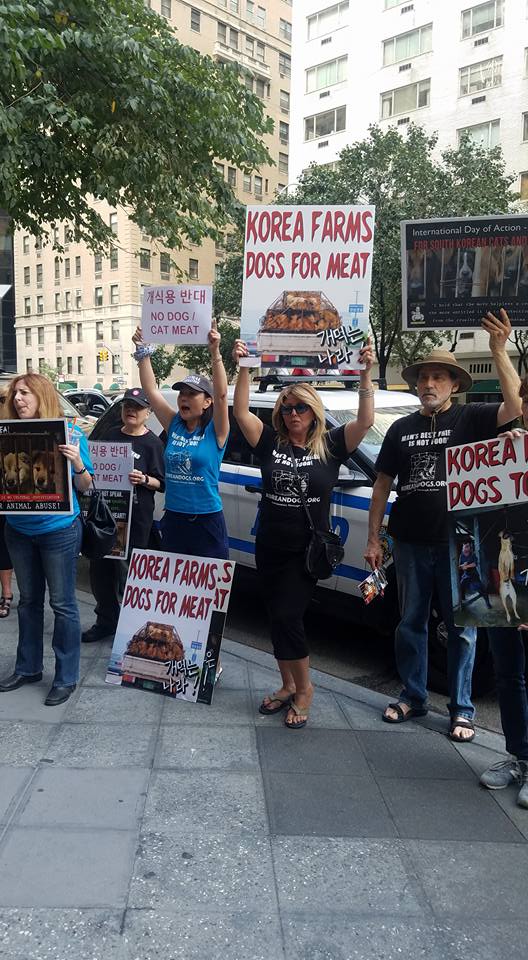