Sharing for Francie Campbell, the organizer of protest event in Australia on February 9, 2017.

In Australia, our democracy recognises the right to protest where people can exercise the right to communicate their opinions and ideas through peaceful protests and demonstrations. I would recommend you seek out what rights you have in your country. Our Federal government has prepared an information booklet, called: The right to protest.

The protest for the dog and cat meat trade in South Korea is, in my mind, a political one, because we are trying to put pressure on their government and other South Korean authorities to completely shut down this industry. Now that South Korea will be hosting the 2018 Winter Olympics in PyeongChang, the light needs to be shone on their wretched and often hidden cuisine – particularly now, as campaigns are promoting South Korean’s wonderful array of cuisines.

I would love to see people in other cities and towns in Australia, and also other nation’s capitals and cities, come together on the 9th February 2017 to protest this barbaric industry.

Below is some steps my friend Susan and I took, in preparation for our protest on this event page:

1. Confirm the ability to protest in your town, city, nation etc.

2. Contact your Federal police or local police and let them know what you are planning, your numbers, and where you want to protest. The Federal police are also helpful in assisting with traffic diversions if necessary, and maintaining order if there are any unexpected difficulties on the day. They will also be contacting the South Korean embassy to tell them we are coming to protest. There will be no secrecy about what we are doing and why we are doing it. I want this to happen so that they will be also open to receiving all our petitions. If for some reason they will not accept the petitions, the Federal police will deliver them to the embassy.

3. Contact any security controllers in your nation if you are protesting in any public areas…..e.g. with our protest, because part of our protest is in front of Australia’s Parliament House in our nation’s capital, we contacted the Parliament Security Controllers.

4. Meet with appropriate representatives beforehand, to discuss logistics about where, when and what you can do with your protest. We arranged a meeting with Federal police officers in front of the Korean embassy to do this. For our protest, the same Federal officers will be attending on the day. Keep communication open with them. I email the Federal police regularly if I have any further questions or issues e.g. can we have dogs on site. I will also keep them abreast of the number of people attending, so they can manage traffic areas.

5. Create an event page on Facebook….and also consult with Koreandogs.org …..I am doing this protest in association with them.

6. Look at logistics for the day eg. suitable clothing depending on your location; water bottles for protesters (we are currently trying to get a water company to donate these); first aid; transport to and from protest; amplification; signage; structures (often you need approval if you want to erect a structure); petitions; t-shirts and caps etc with the a logo on them; IDs for volunteers and main protest organisers.

7.If you are planning to film or video the event….which we are…you will probably also need to get approval for this to take place in any government areas (I got this approval as part of the whole approval for protesting outside Parliament House) …. and asking your protesters for their consent in allowing you or a representative to include them in filming.

8. Ask people to volunteer and assist you with your protest on the day…e.g. people at various locations to direct the march if needed; first aid preparations; handing out petitions.

9. Contact media outlets (especially in your area); celebrities e.g. the Australian or your country’s sportspeople who will be representing Australia in PyeongChang; dog and cat lover groups etc.

Please feel free to contact me if you want to know anything more!

I hope many people – nationally and internationally – will join me and others here in shutting this wretched industry down forever! 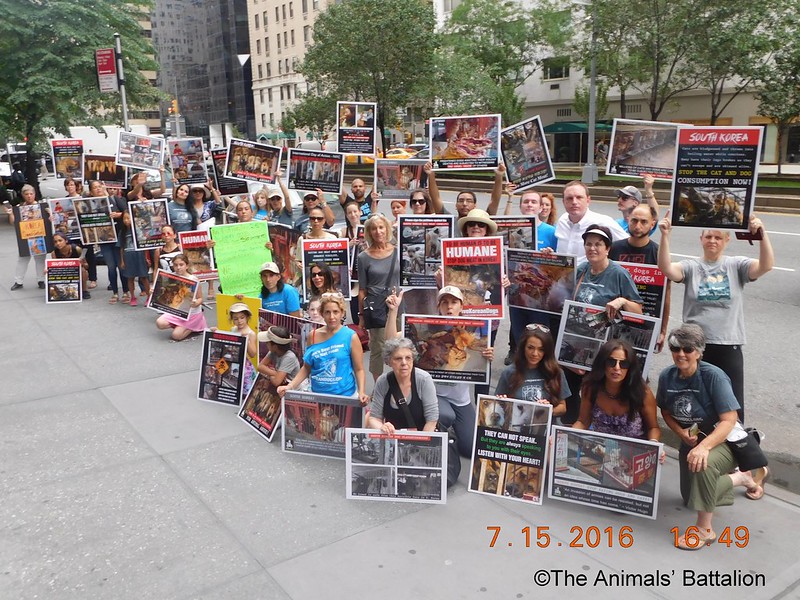