posted by KoreanDogs.org team on May 1,2013 in Uncategorized 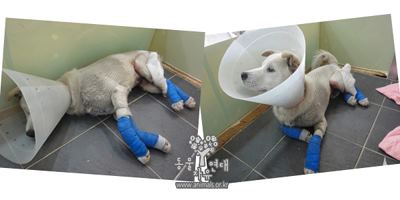 KAWA (Korean Animal Welfare Association) persuaded the old man to hand over the ownership of this puppy who wasn’t even treated properly for his injuries and took him to the hospital for treatment. Click here to see the photos from when KAWA visited the old man’s house with the police to pick him up. He has no broken legs but with abrasions all over the body, it is difficult for him to walk right now. Despite this ordeal, he is a sweet friendly puppy and he has been renamed as “Wang-gu”. Click here to see more photos of Wang-gu.

You can also see photos of “Yang-Yang-Yi” at the bottom of the same page, another KAWA rescue, being treated at the same hospital. His family abandoned him when they moved and he was hung by a metal hanger and struck in the head by a neighbor who was trying to eat him but he escaped. Now rescued and being cared for by KAWA, when he was found metal hanger around his neck has deeply cut into the skin with serious necrosis (death of tissue) and his skull was dent. Click here to see more photos of Yang-Yang-Yi at the time of his rescue.

These cruelty cases happens all the time in S. Korea but most of them are not reported because they happen behind the door. Please help S. Korean government enact a stronger Animal Protection Law and ban the dog meat consumption once and for all. Join, email, and invite all your friends to these Facebook Events: https://www.facebook.com/events/522805737761520/ https://www.facebook.com/events/197633460360955/ 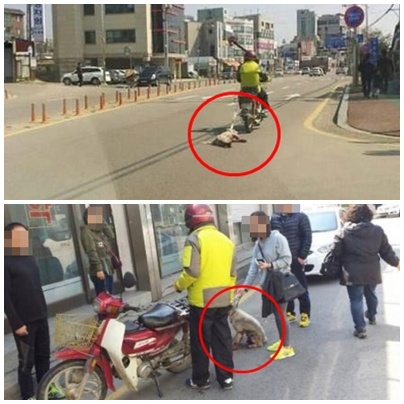 Uiwang, S. Korea. A 71 year old man caught dragging a 5 month old puppy behind his motorcycle on 4/24/13 is being investigated. Puppy was dragged with bloody injuries when a witness called the police. Puppy was treated for his injury but returned back to the old man.
Sources: News1 Korea, Aju News