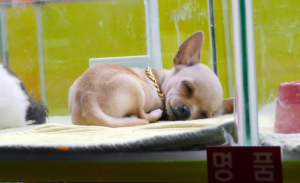 South Korea is planning to expand its already booming puppy mill industry. We are asking you to help bring about an immediate u-turn on these plans and to stop the cycle of horrific abuse and neglect suffered by these innocent dogs and puppies born into such horrendous conditions.

Please call on the Korean government to act and to listen to public opinion by signing our online petition. You can also help by writing directly to president Geun-hye Park, we have a suggested message you can use below which you can add your own words to. Let’s show them how strong our voices can be!

Click HERE to find out more about these latest proposals from the Korean Observer.

Telephone numbers of Korean Embassies around the world: Click HERE!

“The purpose of my call today is to register my deep concern and utter disappointment at your Government’s plans to support and expand the puppy mill industry within South Korea. When many leading nations are banning or introducing legislation to heavily restrict the operations of puppy mills, I find it confounding that your Government seeks to increase the dog population in this wholly irresponsible and incredibly inhumane way. As an animal lover and as part of a high profile animal rights group with vast links and supporters across the globe I ask that the South Korean Government reconsiders its decision and brings about an immediate u-turn on these plans to stop the cycle of horrific abuse and neglect suffered by these innocent dogs and puppies born into such horrendous conditions.”

Email: Click HERE for email addresses of Korean Embassies and Consulate Generals around the world!

Video: CARE (Coexistence of Animal Rights on Earth). Dog farm in Gwangju, South Korea where dead dogs are left in the cages to decompose and for other dogs to eat.

To: Petitioning Office of the president, the Republic of Korea President Geun-Hye Park 대한민국 박근혜 대통령,

We urge you to take swift action and to radically change your Government’s plan to expand the puppy mill, pet auction and pet trade generally. At a time when most forward thinking countries are considering banning or heavily legislating and regulating against puppy mills and intensive ‘factory’ pet breeding practices, we find it unacceptable and shameful that South Korea is making an active decision to move backwards and not forwards with regard to this highly controversial issue.

Encouraging the puppy mill industry via financial incentives with regard to the opening of new mills or the upscaling of mill facilities goes against public opinion both in Korea and globally, is not in the public interest and showcases to the world that South Korea has a complete disregard to animal welfare. Growth in the pet sector in other world leading countries has come through expansion of the pet food and accessory and service trade and not through the use puppy mills which is a dying trade in the majority of forward thinking counties.

You should be aware of the horrific public and environmental health and animal welfare abuses going on in puppy mills across South Korea at this very moment. Below are just a few examples:

– In the demand for smaller and smaller popular ‘tea-cup’ versions of various dog breeds, practices such as premature C-section are commonplace in the industry and often carried out by unqualified puppy mill staff with no regard to both the mother or the puppies’ welfare and often carried out without anaesthetic.

– Intentional malnourishment is also common in a bid to produce smaller and smaller dogs. These ‘tea-cup’ dogs often suffer from horrific genetic defects alongside being exposed to the unsanitary conditions found in most puppy mills.

– The practises at these mills echo those of other intensive factory farming operations, with repeated cycles of insemination and no break for the mother dog, which goes against modern veterinary thinking and advice along with abysmal and inhumane conditions for the breeding animals, caged for life often living in their own filth, suffering from a number of chronic health issues.
o Is this what the average Korean consumer wants when purchasing a puppy? No!
o Is this information even disclosed to the end customer when purchasing their new puppy? No!
o Is this fair on the animal or on the consumer? No!

Supporting the intensive factory farming of dogs creates more opportunity for abuse, not less. In order for regulation to work it has to be actively policed, implemented by local law enforcement and supported through direct action and sentencing in the judicial system. South Korea’s record in this respect is appalling to say the least, so any suggestion that the current proposals will seek to address some of the animal welfare abuses taking place in the pet industry right now is misleading in the extreme.

Your Government through these latest proposals seeks to increase the dog population for short-term economic gains, doing nothing to address the ‘disposable’ culture when it comes to pet dog ownership, which will inevitably lead to an increase in the amount of dogs abandoned, ending up in already overstretched rescue centres or worse sold to dog meat traders. The even greater tragedy is that there are so many dogs and puppies that need homes right now, that have been rescued from the South Korean meat trade and yet there are no proposals on addressing this issue or indeed supporting those charities and NGO’s that work so hard to save and rehome these animals.

South Korea is the world’s 14th largest economy, but it is hard to believe that a nation such as South Korea, which is one of the world’s most highly educated and major economic powers is ignoring its public, snubbing the latest veterinary and behavioural advice with regard to intensive breeding of pet dogs and seeking to solidify its embarrassing reputation when it comes to animal welfare and abuse.

We urge you to carefully rethink these latest proposals and ask that you introduce effective legislation and enforcement to ban the intensive farming of pet dogs via the puppy mill and auction industry. It is time for South Korea to start taking animal welfare seriously and prove to the global community and to itself that South Korea really does have a compassionate and ethical society.