Home / Blog / We thank Shoreline for responding to our call for action against the dog meat trade.

We thank Shoreline for responding to our call for action against the dog meat trade.

[Update December 21, 2016] Since our previous contact with the City of Shoreline, we have received the following formal letter from the Mayor’s Office. Once again, we would like to pass on our gratitude for their caring about the Korean dogs, and for their leadership in taking such prompt action to help speak out for the animals. 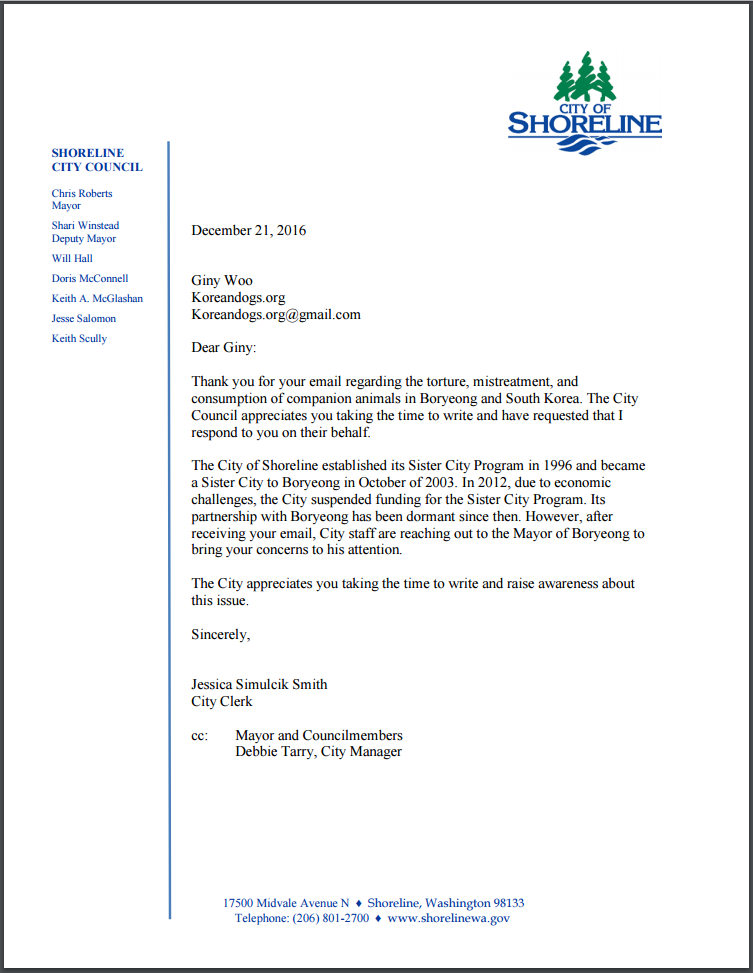 On December 12, City of Shoreline has responded to our Boryeong Sister City campaign/petition that we sent to their office (see below), and we are pleased to say that they responded positively.

They stated “The City of Shoreline suspended the Sister City program with Boryeong in 2012. However, we are attempting to reach out to the Boryeong administration on this topic.”
We would like to thank Mayor Roberts and the members of city council of Shoreline for listening to our concerns and taking action.

Please send an email thanking the Mayor and the City Council members for responding to our concern. You can use our suggested message below or your own words.

Suggested message to the Mayor and the City Council of Shoreline

Following our recent petition, through Change.org, about the mistreatment, torture and consumption of companion animals in Boryeong, South Korea, I would like to thank you for letting us know that, even though the City of Shoreline suspended its Sister City Program in 2012, you are still helping to address our concerns, by reaching out to your former counterparts in Boryeong.

As you are aware, both domestic and international pressure on this issue is required if we are going to incite some real change in South Korea, so I kindly urge you to continue in these efforts until affirmative action is taken by their authorities to end the horrific and illegal practice of the dog meat trade for good.

Thank you again for taking action.