posted by KoreanDogs.org team on July 12,2013 in Action Alert, News

[Breaking News] As new construction of dog farm in Namwoneup Sumangri area is met with strong opposition from the local residents (reported previously by our newspaper on June 8, page 2), the City of Seogwipo decided to cancel the development permit after conducting an onsite guidance and inspection.

According to the city of Seogwipo and the residents of Sumangri, the construction of a dog farm approximately 6,000㎡ (1.5 acres) in size has been in progress since last March in a hilly and mountainous region near Namjoro, Sumangri and the local residents have been strongly resisting for the fear of manure odor, noise, environmental pollution problems and more.

When the residents of Sumangri filed mass civil appeal, the city conducted an onsite guidance and inspection at the dog farm construction site. As a result, contrast to the terms of the original development activity, several violations of Framework Act on the National Land were verified that includes illegal land division, illegal installation of two structures (container and freezer) and rubble pavement on the ground of construction site.

The city decided to cancel the development permit on June 26, notified the business owner on the 27th and is taking steps for the related procedures.

However, the business owner refuted that no illegal land division was committed, containers were installed temporarily to store construction equipment, installation of freezer was not reported because he was unaware of the current law and the rubble pavement was to be covered with concrete.

He also argued that the city’s immediate cancellation of permit without the process of warning, corrective instruction or restoration order is unfair.

A city officials stated that they “verified four separate violations of law through their onsite inspection of Sumangri dog farm construction and decided to cancel the development permit”, and “according to the related laws, there were no problem in how the penalty was carried out from the warning to the cancelation of permit”. Yong-Hyun Kim Reports. 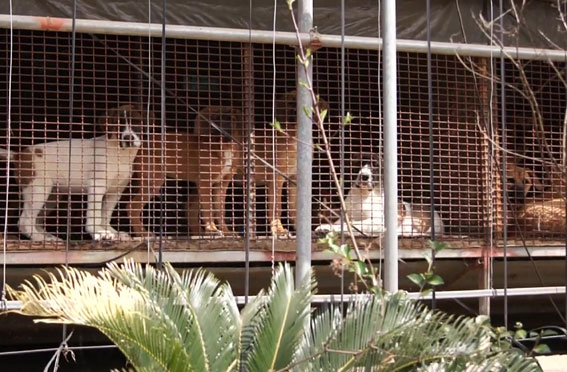 Photo: Dogs at existing dog farms in Sumangri (Blog: Love for Jeju and Love for Environment)