Here is an update on our campaign to ‘Bologna Mayor Virginio Merola: Tell Friendship City Seongnam, South Korea: That We’re Opposed to the Torture and Consumption of Dogs and Cats.’ 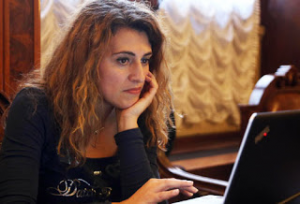 Following our appeals on Twitter, Ms. Federica Salsi, one of the Council Members for the City of Bologna, sent a reply advising us of the (very disappointing) response from the Assessor responsible for this matter.

The Assessor’s response basically reads: “The agreement has been signed for a co-operation on matters of economy, technology, culture and youth policies, and not for those concerning animals”.

This is the e-mail address for Ms. Federica Salsi, a very nice person to contact for her future collaboration and support: [email protected] 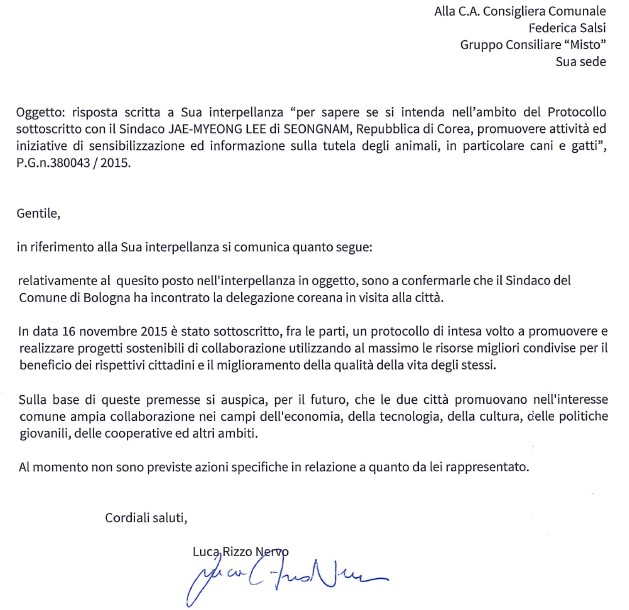 And, another link to one of Ms. Salsi’s posts: http://www.federicasalsi.it/2016/01/il-sindaco-di-bologna-virginio-merola.html?m=1

Which summarized, translates as: She explains her disappointment about Mayor Merola’s silence and the Assessor’s declaration, and about the bad publicity Bologna is receiving for having signed a partnership with Seongnam, a city in which there is a terrible trade of cruelty inflicted on dogs and cats. She commented on the petition (its objects and aims), highlighting that, in only one day, it had already received over 2,000 signatures – she realized that it is not a good thing for Bologna to receive a petition signed by thousands of strangers! She also hopes that the “Consulta Animalista” (a new city body created to protect animals in Bologna) could take action with Seongnam and do something against its dog meat trade.

Please send a thank you message to Ms. Federica Salsi, on her blog page, for speaking out against the terrible cruelty.

Below are sample “Thank you” messages you can use.

– Grazie di cuore Federica per quanto sta facendo, auspicando che la città di Bologna intervenga per fermare il crudele commercio della carne di cane a Seongnam (Translation: Thank you so much Federica for all you are doing: the hope is that the City of Bologna will intervene to stop the cruel dog meat trade in Seongnam)

– La ringraziamo Federica per il Suo interessamento e per quanto potrà fare affinchè la città di Bologna si impegni a trovare accordi con la città di Seongnam e vietare definitivamente il commercio della carne di cane (Translation: Thanks Federica for your interest and for what you could do so that the City of Bologna finds agreements with the City of Seongnam to ban forever the cruel dog meat trade)

– Complimenti per il Suo lavoro e grazie per continuare ad intervenire affinchè il Comune di Bologna si attivi per collaborare con la città di Seongnam a far chiudere i mercati e le macellazioni illegali e cruente dei cani (Translation: Congratulations for your work! Thanks for keeping on intervening so that the City of Bologna will take action to cooperate with the city of Seongnam to close the illegal markets and the cruel slaughterhouses of dogs)

Please click HERE to take the action today to speak out against the torture and killing at the Seongnam Moran Market.