Home / Blog / Yongin: We demand the immediate arrest of a man who killed an elk by burning it alive as well as the rescue of the remaining animals!

Yongin: We demand the immediate arrest of a man who killed an elk by burning it alive as well as the rescue of the remaining animals!

posted by KoreanDogs.org team on January 8,2014 in News

This is a translation of the update on January 3rd, 2014 for the case “Gunshot killing of stray cats! Illegal capture and brutal slaughter of stray dogs! We will report this man to the police!” on KARA(Korea Animal Rights Advocates)’s website: [Request for Civil Complaints] We demand the immediate arrest of a man who killed an elk by burning it alive as well as the rescue of the remaining animals! [민원요청]고라니를 산 채 불태워 죽인 남자의 즉각 구속과 남은 동물 구조를 요구한다!

The brutality of this man who has been illegally capturing and slaughtering stray dogs, cats and wild animals indiscriminately, is beyond comprehension!
If there was a “hell”, this man’s yard would be it.

We demand that the police and the local government rescue all the remaining animals from this hell, cancel his gun permit as well as confiscate all his firearms and take him into custody immediately!

Early in the morning of January 2, 2014 members of Korea Animal Rights Advocates (KARA) confirmed the presence of a wild elk in captivity at this man’s house and immediately began the rescue process.

Despite the difficulties in getting hold of someone with authority, we contacted the city of Yongin’s Cheoin District Office which has jurisdiction over this man’s property, reported the illegal capture of the elk and requested it’s protection. We also contacted the police for the rescue and protection of the elk and even arranged with a veterinary hospital to treat and protect the injured elk after the rescue.

However, when the dispatched police raided this man’s yard, that was being used as an illegal slaughterhouse, the elk had already disappeared without a trace. Our KARA staff at the scene showed the photo of the elk, in the cage it was held captive in, to the police and requested a further investigation. The police searched the yard, sifting through cages, his refrigerator and even the contents of the boiling kettle. The man stated that he was “boiling a cat that he picked up which was ran over by a car ”. After inspecting the carcass of the animal, they concluded that it definitely wasn’t an elk based on the ‘length of its legs’.

They looked for any traces of the possible slaughter of the elk, any blood or fur on the ground but unfortunately they could not find any traces of this elk.
We were aware of the existence of video footage that could provide us with the necessary evidence but because this was the first day of the new year, very regrettably it was impossible for us to immediately access the video.

Last night when we finally got to watch the video, KARA staff in charge and several other staff members cried silently…. It seems that at the same time we were urgently busy making rescue requests from the police and the district office with the photos that were taken, the elk in the video was being burned alive!! 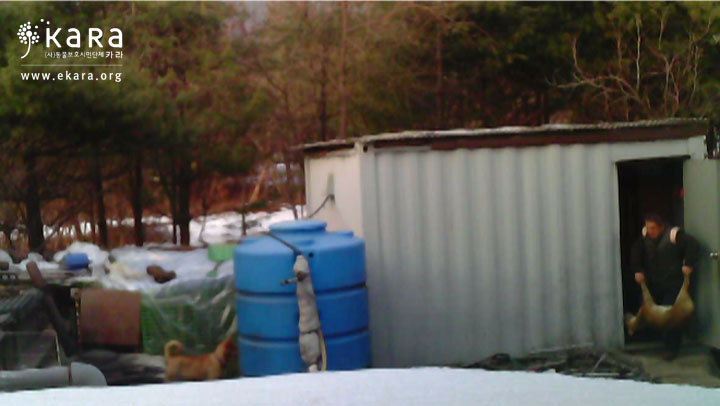 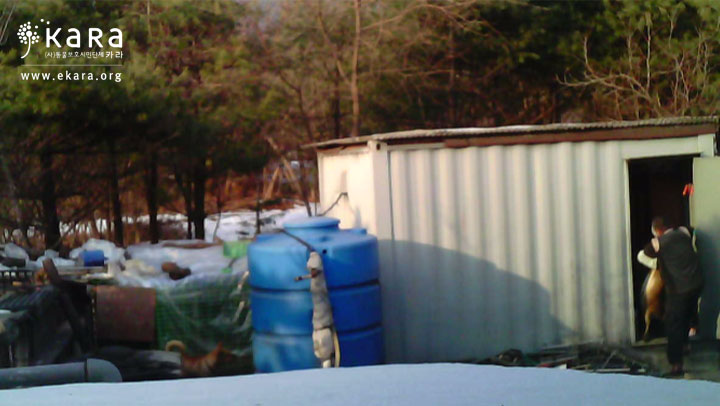 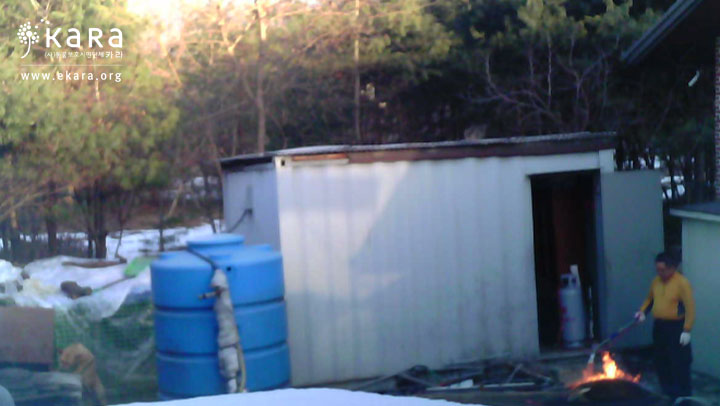 “The butcher illegally captured this poor animal, left him in terror and agony for 2 days, and knowingly and intentionally committed the atrocity of burning him alive!
The elk struggled in excruciating pain and died.”

The reason why we cried is not just because we were sad that the elk died such a horrific death. It’s also because of the tragic result of our inability to access and watch the video because of the New Year holidays. We did our best but that wasn’t good enough. We will not make any excuses for our failure to save the elk.

No trace of the slaughter was found, not even a strand of hair, a drop of blood or traces of a struggle, because he was burned alive. Without this knowledge, KARA and the police assumed that the elk was hidden away somewhere but in reality we were just busy looking everywhere around the area where he was burned. Since this man leaves his work at a golf course around 3pm, we thought that if we got there before he did, we could save the elk.

Only one day…. if only we had been there on January 1st…
We could not save the poor elk that was still alive on the morning of January 2nd crying out for our help…..
Please forgive us.

“The butcher ties down the legs of an elk who is bleating out, drags him to a storage area, shouts some kind of profanity and throws it to the ground mercilessly.
The elk bleats in agony and right next to this, a dog is barking nervously.”

“The butcher picks up a blowtorch and shoots out flames at the elk. It writhes in pain and probably passes out because it stops moving. The butcher points the flames at the elk’s face and the motionless elk once more writhes in the throes of death at the 32 second mark in the video.
While burning the elk alive and watching him writhe in agony, the butcher seems unaffected and calm!
Who is this callous, cold hearted man?”

In our opinion, what this man did to the elk is a crime against humanity, and the fact that this man possesses guns and lives among us as our neighbor is terrifying! We know that Young-Cheol Yoo and Ho-Soon Kang started out slaughtering dogs before they became serial killers! And the average person can easily predict what kind of cruelty will be inflicted on the animals remaining in the “hell” this man has built.

Therefore, the judicial authorities and the local governments must seize all firearms of this dangerous man immediately, take him into custody, and take action to rescue and protect all the remaining animals.

We are urgently asking everyone who reads this to help.
We cannot revive the animals that died pitifully. However, by severely punishing this vicious man we can sound an alarm in this society where the trend of disregard for animal life is widespread.
KARA will file a bill of indictment today, presenting all the evidence and videos, requesting a very harsh punishment for this man.

Now you must help us!
Please share this as wide as possible and pressurize the judicial authorities and the local governments for the arrest of this man, seizure of his firearms, and the rescue and protection of the remaining animals!!!

Listed below are the criminal charges against this man:

“The man puts an animal he killed into a sack and is handing it to someone. The animal in the sack was a poor stray animal that perhaps was someone’s pet, or perhaps a stray mommy-cat that was feeding her litter of kittens. We must not let these precious lives be this man’s free source of income.”

Control of Firearms, Swords, Explosives, etc
Based on Article 17 (Restriction on Carrying, Transport, Use, Remodeling etc. of Guns, Swords, Gas Sprayers, Electronic Shock Machines and Cross bows), carrying of guns, swords, powders, gas sprayers, electronic shock machines and crossbows with himself or transport them other than in case where he intends to use them for the permitted purpose, or there is any justifiable reason.

Wildlife Protection and Management Act
Based on Article 19 (Prohibition, etc. of Capture of Wild Animals), capturing of wild animals (Section 1), Article 8 (Prevention of Cruelty to Wild Animals), killing by a cruel method, such as the use of toxic chemicals, or by a method that is disgusting to other persons (Item 1), causing pain to the wild animals or inflicting any wound upon them after capturing and cooping them up (Item 2), laying or using explosives, snares, traps, nooses, pitfalls, electric power and nets to capture wild animals (Section 2, Item 1)

This is the vehicle this man uses to capture animals. 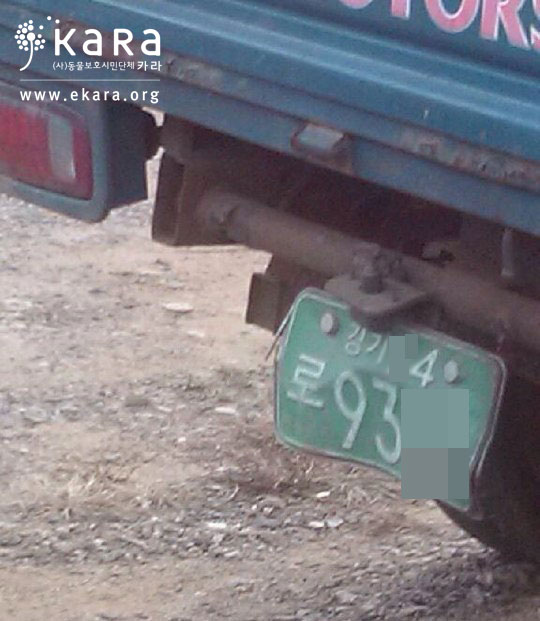 Please remember this vehicle and protect the animals by not allowing this man to hurt any more animals around him.