posted by KoreanDogs.org team on September 22,2017 in Busan, News 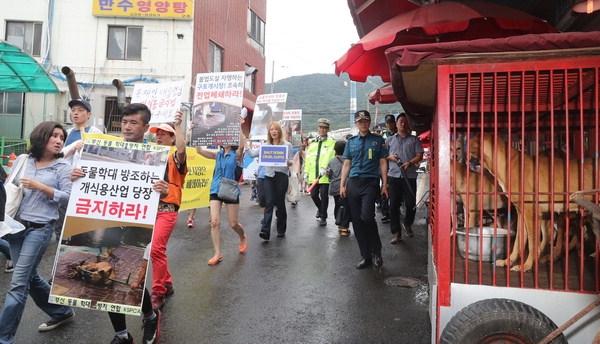 Photo: Busan.com. On August 22, 2017, Animal activists/organizations including Busan Korea Alliance for the Prevention of Cruelty to Animals(KAPCA), ADF, Coexistence of Animal Rights on Earth(CARE), Solidarity of Animal Rights Activists, marched down the Busan Gupo Market protesting against the dog meat trade.

Finally, a step forward in the campaign to shut down the notorious Busan Gupo Dog Meat Market. It’s taken numerous campaigns by many groups and individual activists for a lot of years, and countless reported cases of horrific cruelty, for the Busan government to finally take this action. The Korean government is very good at taking the heat and doing nothing to change, so we must keep up the pressure!

In response, on September 13, 2017, Busan.com reported that a Task Force (TF) team had been formed and will begin operations to resolve the problem of the Gupo Dog Meat Market.

The Busan-Buk-gu Office announced that the TF team, headed by Buk-gu deputy mayor Kim Yoon-il, will include the Economic Promotion, Administrative Support, and City Management departments. Opinions from other parties such as animal protection groups and the Dog Meat Trade Associations will also be sought.

The TF team will begin by stopping on-site slaughter; allowing the voluntary removal of illegal slaughter facilities; removing display cages; managing signboards; eradicating the illegal private use of roads; and holding meetings with the trade association. In the mid-to-long-term, the team will encourage Gupo Market dog meat vendors to transition away from the dog meat industry and promote the revitalization of this area. The Industrial Management team, Sanitation Administration team, and the Hygiene Guidance team will all be conducting periodic joint crackdowns.

Gupo Livestock Trade Association President Yong-Soon Park stated that “80% of the dog meat vendors agree and are willing to actively cooperate in either transitioning to other work or closing down their businesses if their local government is willing to provide support for the transition.”

Deputy Mayor Kim stated, “Although there are limits to cracking down under the current law, I will do my best to prepare measures that citizens can empathize with.”