posted by KoreanDogs.org team on January 15,2015 in Action Alert, Campaign

The United Nations Secretary General Ban(Family Name) Ki-Moon(Given Name) is a South Korean National. We have been trying to get him to take action to stop the torture and mass murder of millions of dogs in his country’s dog meat industry for many years but still have not heard from him. Please call, email and write to him today! He has the power to stop the South Korean Dog Meat Cruelty! You can use our sample letter or use your own words.

Click HERE to see the form response the United Nations Secretary General’s Office is sending out to our protest letters! 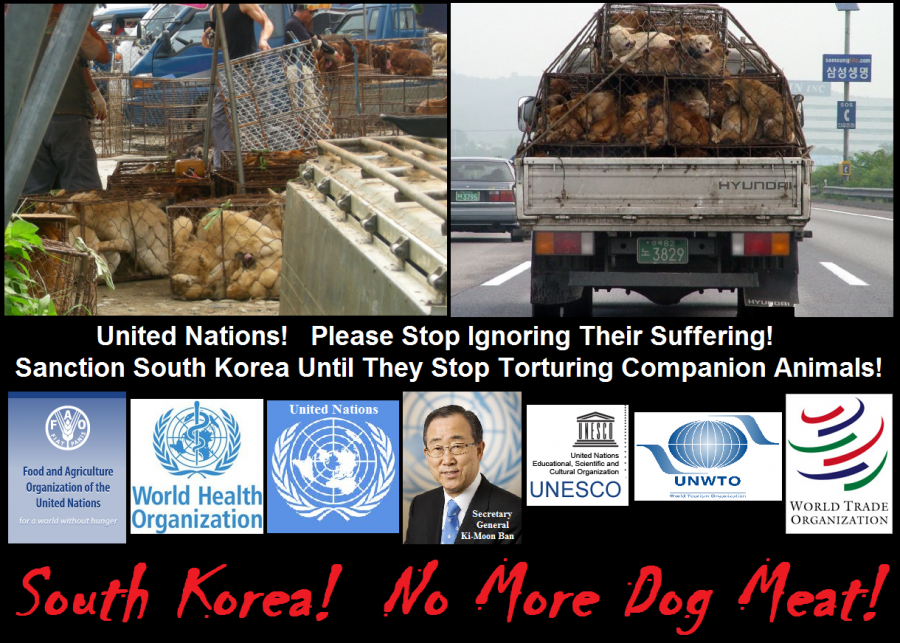 The $2 billion dollar-a-year South Korean dog and cat meat industry, which extinguishes the lives of approximately two and a half million dogs a year for meat or gaesoju, a dog wine or broth, and thousands of despised and doomed cats for so-called “health” tonics or goyangyeesoju, and soup, operates in a sordid and illicit world where farmers and butchers kill with frightening impunity in the most abominable fashion. Dogs are killed with high-voltage electrocution, which takes anywhere from thirty seconds to three minutes, hanged, and even beaten to death at the request of customers who believe the meat more tender and tastier the greater the suffering (one of the most pernicious of myths), and that the so-called medicinal properties are enhanced. They are most often killed within sight of their cage mates. They are then thrown into a tub of boiling water, often still alive, and then into a rotating drum for the removal of their fur, and finally blow torched. At Moran Market, South Korea’s largest open air-market for dog meat, dog carcasses are on display next to the cages of live dogs. Cats are often bludgeoned and thrown into boiling water while still alive. At the farms, dogs are fed germ-infested, rotting, and fermented human leftovers, a health risk to both the dogs and those who eat them. In South Korea, dogs and cats’ lives are short and ferociously heartless until they tremble no more at the hands of their slaughterers as cage mates look on. https://koreandogs.org/

“Using electric rods did not instantly kill the dog. First contact to electric rod did paralyze the dog but dogs were still conscious. In most cases, two to three contacts with electric rod will finally make the dog motionless. Duration of electrocution differed by slaughter houses. First contact is within two seconds, and follow-on contact required longer contacts. At some slaughterhouses with poor electricity system, the dog did not lose consciousness after using electric shock. Rather it tried to bite off the electric rod. It is one cruel episode that proved electrocution does not instantly kill the animal. According to our research, electric shock is followed by plucking, where whole process took two to five minutes. Dogs can hardly be dead in such a short period of time. In such cases, dogs are paralyzed but still conscious to suffer from the pain of plucking and die.”

Here the plucking or removal of fur is done by throwing the dog often paralyzed and unable to move but still conscious into the boiling water and then into the rotating drum that removes the fur. This is a terrifying and excruciating experience beyond imagination.

You can see an evidence of this cruelty from this video of raid by a Korean TV broadcast company and an animal rights group in Korea called Coexistence of Animal Rights on Earth (CARE): http://youtu.be/ldblUoQ2tvo

Please also take a look at this video that shows the dogs being transported to Seongnam Moran market (the largest dog meat market in the country) during the pitch darkness of the night, taken one by one out of the cages where they were packed unable to move for many hours, electrocuted and thrown into boiling water. Some of these dogs thrown into the boiling water could be still alive and able to feel the excruciating pain and terror of being boiled alive. Click “CC” for English caption. http://youtu.be/vHB3uwB9kyA (At 6:17 this scene starts).

According to the CARE’s report from their year long undercover investigation last October (visiting total of 82 locations of dog meat farms, markets, slaughterhouses,..) of dog meat industry, FAQ #7, “Electric shock brings extreme pain, and dogs often remain conscious throughout repeated applications. It is known that in some cases, dogs stay perfectly conscious even when they are put in boiling water or hair removal machines.”

In addition to the unspeakable cruelty perpetrated dog meat trade is also a serious threat to human health. Dog farms are hotbed for infectious diseases. Since there is no disease control these dogs suffer from diseases from highly infectious and transmittable bacteria, virus, ectoparasites, endoparasites, and fungi. Out of 165 dogs bred at a dog farm in Seoul area, 83 dogs(50.3%) were infected with endoparasites and 23 dogs(20.2%) were infected with heart worm.

Puppies suffer from malnutrition because they are fed rotting food waste (infested with pests such as rats, cockroaches, flies..) after being weaned. In order to hide from the law and civil complaints, most dog farms are located in remote areas where sun is scarce causing vitamin D (necessary for bone growth) deficiency.

Locked in cages for months, dogs are bored and stressed from being packed with other dogs and constant stench. Stress hormone weakens their immune system and they become susceptible to hormonal diseases such as hyperadrenocorticism.

Antibiotics, antidiarrheal and steroid are used to control distemper, parvovirus, various respiratory and digestive diseases but abuse of drugs led to tolerance against antibiotics and relevant innate problems. In some cases, 10 times the normal doses were being administered by the farmers themselves without the supervision of veterinarian.

There is no appropriate animal-protection legislation to prevent the animal cruelty currently taking place in S. Korea. As someone who believes strongly that animals should not be treated in this way, I request that you investigate and address this issue immediately. Please sanction S. Korean government until they strengthen the Animal Protection Law to prevent animal cruelty and to introduce basic animal-protection regulations. It must also provide penalties for violations and ensure that mistreated animals can be legally seized from abusers and given immediate refuge. I request that you insist S. Korean Government to create an enforceable law to ban the torture, killing, sale, and consumption of dogs and cats. Please don’t let the S. Korean government get away with this outrageous cruelty to companion animals.
The favor of your reply is requested.
Thank you for your attention to this matter.