posted by KoreanDogs.org team on June 16,2022 in Uncategorized

Nitra, Slovakia: Tell Sister City, Gyeongju, South Korea, that you oppose the torture and consumption of dogs and cats.

Gyeongju became a Sister City to Nitra, Slovakia, in 2014.

In Gyeongju, there are numerous dog farms, slaughterhouses, markets, and dog meat restaurants where the dogs, who have been tortured their entire lives, end up being slaughtered in the most inhumane ways, such as by electrocution, hanging or beating; and then thrown into boiling water – sometimes while they are still alive. In many places, dogs are killed in full view of other terrified, caged dogs; and this takes place in broad daylight. In Angang Dog Meat Market in Gyeongju, live dogs are displayed in cages, slaughtered, and their body dismembered right on the spot for heartless customers. In addition, many abandoned and stolen former pets end up in this industry and are subject to the same cruelty. 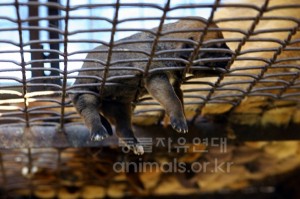 Even if half of these “Health Centers” and restaurants serve dog and cat ‘ingredients’ in one form or another, imagine how many dog/cat slaughterhouses must be present in the vicinity of Gyeongju to supply these outlets.

Nitra: Tell Sister City, Gyeongju, South Korea, that you oppose the torture and consumption of dogs and cats.

Do you think Nitra should be a Sister city to any city that allows dogs and cats to be tortured and eaten by people?

Gyeongju is one of the largest dog meat suppliers and consumption cities in South Korea. In Gyeongju, there are numerous dog farms, dog slaughterhouses, dog meat restaurants, and so-called “Health Centers” where they serve soup made of dog meat as an elixir. In Angang Dog Meat Market in Gyeongju, live dogs are displayed in cages, slaughtered, and their body dismembered right on the spot for heartless customers. Dogs suffer their entire lives in utter misery in filthy, feces encrusted raised wire cages, only to be slaughtered in the most horrific ways. They are killed by electrocution, hammer strikes to their head and necks, being hung, being beaten to death, having their throats slit, being burned alive with a blowtorch, or thrown into a vat of boiling water while still alive. In many places in Gyeongju, dogs are killed in full view of other terrified, caged dogs who tremble with terror. These poor dogs are often burned alive in their cages, unable to escape. They are fed rotten garbage full of chili peppers not fit for any animals to eat, and they are never given water! Also, people’s beloved pets are often stolen and sold to these businesses, where they meet the same horrific fate. Dogs and puppies who died of diseases are tossed away like garbage, often left in front of cages to rot while the mother dogs watch and cry out in despair for their dead babies.

Would you please urge Gyeongju Mayor Joo Nak-Young to close down all illegal dog farms, slaughterhouses, markets, truckers, and restaurants serving these animal products? An online petition calling for your support in ending the horrendous Gyeongju’s dog and cat meat cruelty is in progress: https://chng.it/yTfVDDPh.

No matter where you live, PLEASE SHARE these actions with your friends, especially those who live in Nitra! 🙏