Home / Blog / 10,000 dogs slaughtered each day, artist on his knees in front of dogs in China!

10,000 dogs slaughtered each day, artist on his knees in front of dogs in China! 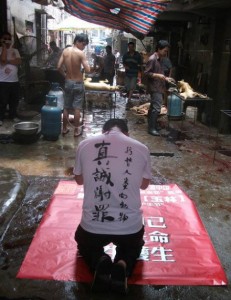 A Chinese performance artist apologized to the dogs slaughtered to be eaten by human.
Last June 21, 12 which was Haji(夏至), a performance artist named Sankung(片山空) along with approximately 10 animal advocates staged a special performance at a dog meat market in Yulin(玉林), China. Sitting on a red banner with writing that reads “I sincerely apologize to the animals on behalf of mankind.” Sankung bowed with apology towards the dogs slaughtered at a dog meat market.

On June 22, after the performance, Sankung messaged on Weibo(微博), a Chinese’s version of twitter, “Cats and dogs carcasses were piled up, the ground was soaked with blood and the shops were busy.”
He added “Watching this scene on-site, I couldn’t help myself but to apologize.”

This performance by Sankung is his 18th and he has been travelling around the country staging the performance of apologizing to animals for the last 3 years since 2010. Last winter of December 2011, ahead of the winter solstice (冬至), he visited Guizhou(貴州), city of Guiyang(貴陽) and performed an art of going into a cage naked to appeal against dog meat consumption. 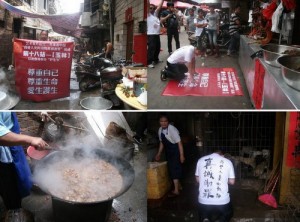 Meanwhile, in Yulin(玉林) where Sankung staged the performance art, June 21 “Haji” is referred to as “Dog Eating Day”. In Yulin, at this time of the year it is known that on average more than 10,000 dogs per day gets slaughtered. As the photos of dog meat vendors’ cruelty such as tying up dog’s mouth with wire and brutally beating the dogs with broom stick spread on the internet, public opinion against the dog meat consumption was formed.