His Holiness the 14th Dalai Lama, please speak out against the brutal dog meat trade.

posted by KoreanDogs.org team on April 6,2017 in Action Alert, Campaign 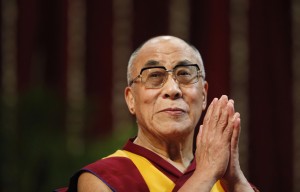 His Holiness The Dalai Lama is a highly revered spiritual leader of Tibet and a human rights activist known throughout the world. He is the best known Buddhist leader of today and his teachings on practicing peace and compassion are followed worldwide.

He was born on 6 July 1935, to a farming family, in a small hamlet located in Taktser, Amdo, northeastern Tibet. The Dalai Lamas are believed by Tibetan Buddhist followers to be manifestations of Avalokiteshvara or Chenrezig, the Bodhisattva of Compassion and the patron saint of Tibet. Bodhisattvas are believed to be enlightened beings who have postponed their own nirvana and chosen to take rebirth in order to serve humanity.

We would like His Holiness to speak out against the practice of eating companion animals and the cruelty involved in the trades, and to share the Buddha’s teachings on compassion to animals to his followers and to the world.

Life is as dear to the mute creature as it is to a man. Just as one wants happiness and fears pain, just as one wants to live and not die, so do other creatures. – His Holiness the 14th Dalai Lama, http://www.dalailama.com/

Please call, email and write to His Holiness the Dalai Lama today! You can use our sample letter below or use your own words.