posted by KoreanDogs.org team on August 27,2015 in Action Alert, News

“Eating Happiness” is the most important documentary in the fight against dog meat industry in Asia. Watch the trailer!

Eating Happiness is the first call-to-action documentary exposing the true nature of dog meat consumption in Asia. Director and Producer Genlin takes viewers through the backstreets and rural villages of Thailand, Vietnam, South Korea and China to uncover the brutal violence of the dog meat trade. Film highlights include witnessing impassioned animal activists stop trucks laden with thousands of stolen pet dogs on the way to be sold, undercover footage of the horrifying living conditions on South Korean dog farms, an interview with the proud owner of a so called “research center” that has developed over 30 products including cosmetics made from dog parts, and the heroism of a female activist who single-handedly cares for 3,200 dogs she has rescued from dinner tables. The film explores the habits and relationships between humans and dogs in Thailand, Vietnam, South Korea, China and the United States. The film’s powerful footage will touch viewer’s hearts and encourage them to reflect on humanity and the social issues we encounter.

Eating Happiness reveals that 30 million dogs are killed annually in Asia, 70% of whom are stolen pets. The film sheds light on several disturbing practices associated with the consumption of dog meat in Asia including a grueling transport to the slaughterhouse, cruel and inhumane methods of slaughter, and torture prior to death as some Asians have the superstitious belief that torturing a dog prior to death will enhance the flavor of the meat by increasing the dog’s adrenaline.

The film has acquired the support of the largest animal protection organization in the world, the Humane Society of the United States (HSUS). HSUS and their members worldwide will be publicizing Eating Happiness as the best hope to bring an end to the consumption of dog meat in Asia. The film’s incredible footage will educate millions of viewers worldwide who can add their voice to stop this inhumane practice through legislation. Eating Happiness will be submitted to the 2016 Oscars with private screenings beginning September 26, 2015, and public screenings beginning October 2, 2015.

Thank you for caring! 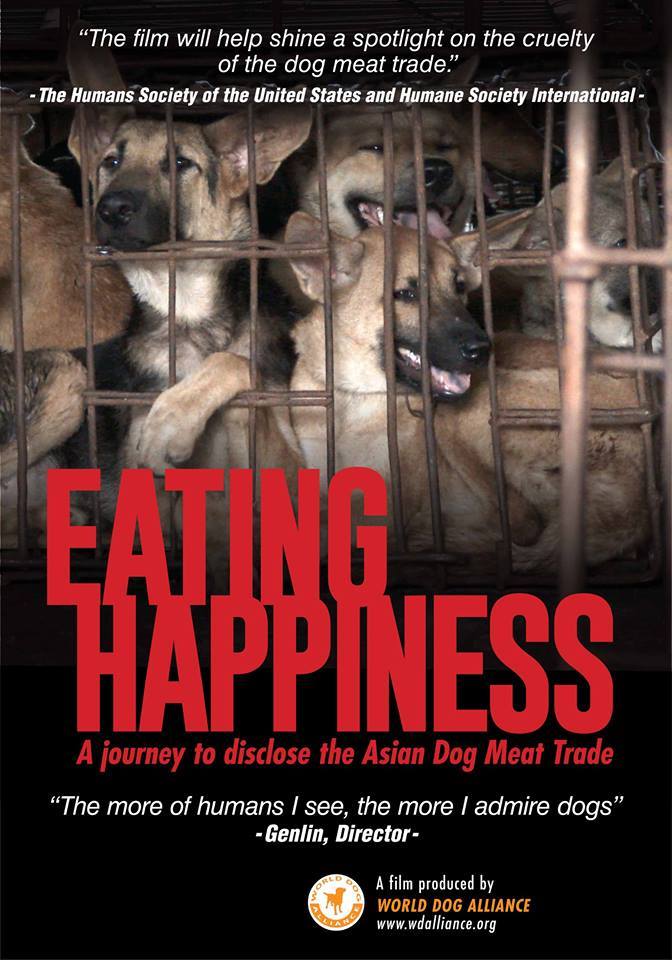