posted by KoreanDogs.org team on July 28,2014 in Campaign

A demonstration to speak out against the horrific treatment of Korean dogs and cats was planned for July 12, 2014, Saturday between 12pm and 1:30pm at the the St. Johns Town Center in Jacksonville, Florida (at the cross point of Town Center Parkway and Midtown Parkway, Jacksonville, Florida 32246) where thousands gather for the weekend to shop and dine. Bob Heisler, our organizer, spent many hours and contributed his personal funds to prepare for this event. However, when he arrived at the location he was met with the sheriff’s deputies and the shopping center security. Bob was told that the area was all private property, even the grass between the sidewalk and the curb which was the intended demonstration site. However, Bob found out later that they were lied to.

“We were fraudulently denied our right to demonstrate on behalf of KoreanDogs.org on public property at the St. Johns Town Center shopping complex in Jacksonville, Florida on 7-12-14. St. Johns Town Center security flat out lied and told me that Town Center Parkway is private when in fact it is a public road. The Jacksonville Sheriffs Department backed them up with six deputies against five activists. I generally respect and admire the police but not in this case. I earned my right to free speech and my right to freedom of assembly as a U.S. Army military policeman guarding nuclear missiles in Germany during the Vietnam War. We still have freedom of the press. Here is my KoreanDogs.org display ad as it appears in today’s edition of Jacksonville’s FLORIDA TIMES-UNION newspaper. Section A, page 3, three columns above the fold. I will NEVER stop fighting against the torture and consumption of dogs and cats.” said Bob. 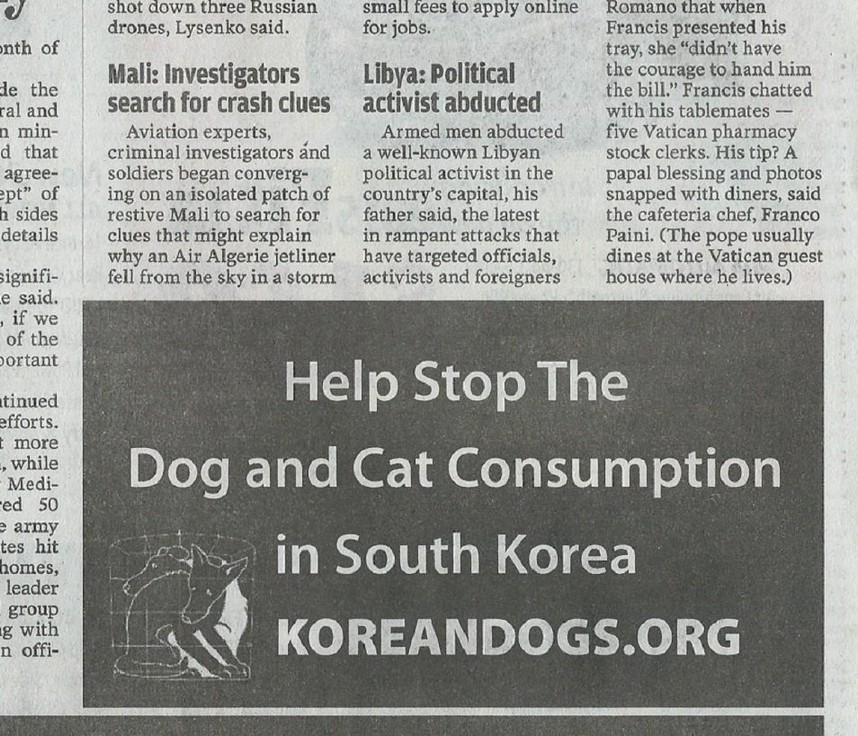 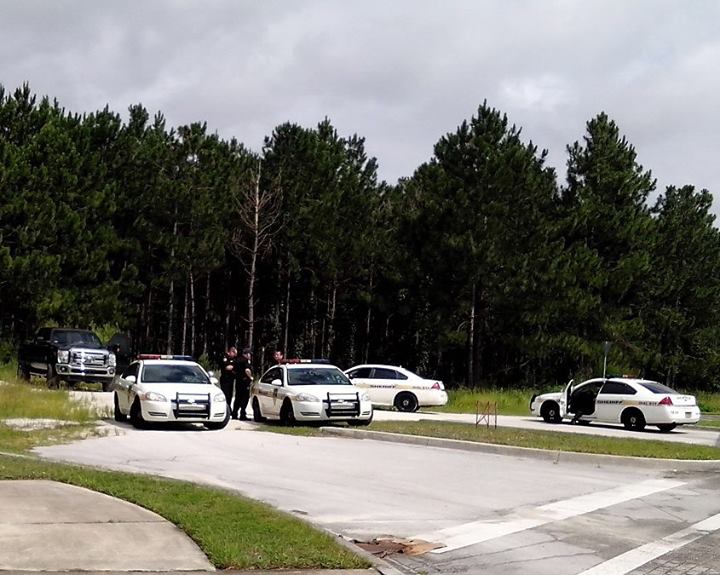 Jacksonville Sheriff’s deputies and the St. Johns Town Center security plotting strategy about how to protect shoppers from an invasion by five compassionate protesters trying to prevent millions of dogs (and cats) from being tortured and eaten. They even called for reinforcements. Two more deputies drove up. Thanks to Lisa, Tonya, Cathy, and Alan for coming out in a lightning storm to try and save the dogs. 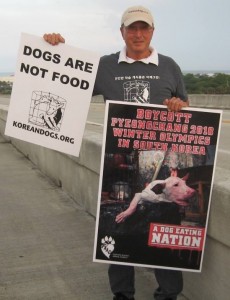 Bob all ready for the event. Thank you, Bob!