KARA discloses results of their investigation of ‘meat dog farms’ at press conference.

South Korea is the only country in the world that farms dogs for meat!

– In South Korea, there are at least 2,862 ‘meat dog’ farms, breeding 781,740 dogs for human consumption.
– There are 422 large- scale dog farms with more than 500 dogs.
– The yearly average of only 3.64 dog farms (‘meat dog’ and pet dog farms) are inspected by local government.
– There is a need for public opinion (consensus) for phased closure of ‘meat dog farms’.

At a time when 10 million Koreans are sharing their homes with companion animals, more than 1 million dogs are slaughtered annually at 3,000 of the “world’s only dog meat farms”.

It would not be an exaggeration to call these meat dog farms “companion animal slaughterhouses.”

These statistics, however, may be low and the breeding environment and slaughtering process of dogs is unregulated.

While dog meat consumption still exists in countries like China and Vietnam, South Korea is the only country with farms that breed dogs continually, and where large farms housing more than 1,000 dogs are in operation for the purpose of human consumption. These animals are confined their entire lives to tiny steel raised wire cages before they are slaughtered and eaten.

To gain an understanding of the meat dog farms that operate in the darkness of no governmental regulation, Representative Lee Jeong-Mi of the Justice Party and animal rights group Korea Animal Rights Advocates (KARA; Im Soon-Lye, director) requested data from the Ministry of Environment on dog farms that are required to submit reports for the livestock manure treatment facility and conducted analysis.

Based on this data, KARA conducted field investigations in sample areas including Gyeonggi-do Gimpo and Yeoju, Gangwon-do Wonju, Gyeongsangbuk-do Gimcheon for 10 months beginning August 2016 and inspected the state of the breeding conditions and livestock manure treatment status of these dog farms.

As a result, it was confirmed that there are at least 2,862 dog farms in South Korea that are over 60 square meters and therefore are required to file livestock manure treatment facility reports.

There will be a significant increase in the total number of dog farms if the un-reported small to medium size farms that are less than 60 square meters as well as the farms located in the mountainous areas and remote places are included in the total.

Taking in account the dog farms that are not included in the statistics, it is estimated that more than one million dogs are distributed annually for human consumption.

Each year in our country’s animal shelters, about 32,000 lost or abandoned pets who are not reunited with their families are euthanized or die, an average of 88 dogs per day. In comparison, an estimated 2,740 dogs are slaughtered at dog farms every day for human consumption.

The number of dogs being slaughtered for human consumption is 30 times greater than the number of abandoned or lost dogs dying in shelters!

Since there are no licensed slaughterhouses, as there are for cows and pigs, most of the slaughtering of dogs for human consumption is conducted on individual farms. It is presumed that the dogs are slaughtered right on dog farms or at slaughterhouses called “workshops” and distributed as food.

In Gyeonggi-do, dog farms are concentrated in Yeoju, Pocheon, Icheon, in Gyeongsangbuk-do, Gimcheon, Gyeongju, Seongju, Andong, and in Chungcheongbuk-do, Chungju and Eumseong. 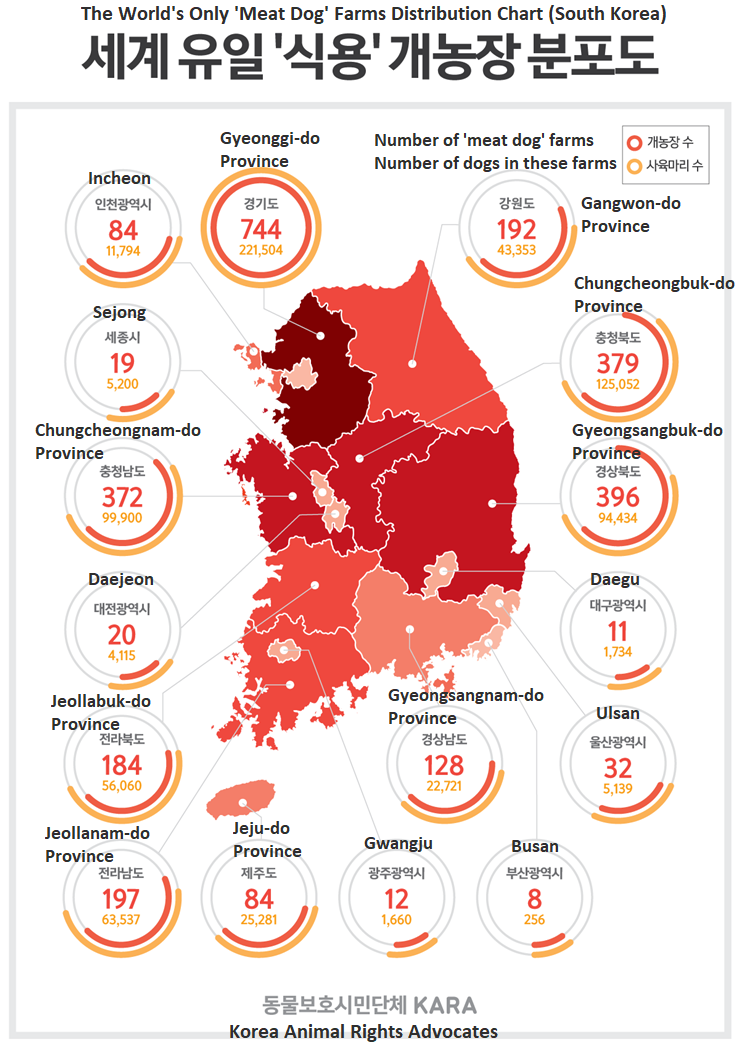 The breakdown by province of the average number of dogs bred in dog farms is Chungcheongbuk-do 330, Jeollanam-do 323, Jeollabuk-do 305, Jeju-do 301, Gyeonggi-do 297.7 and Sejong 273.7 respectively, all being higher than the nationwide average of 273.

There are over 77 factory corporate dog farms (2.7%) nationwide that breed more than 1,000 dogs each.

Considering the fact that the dogs are freely bred in dog farms and the number of dogs reported is inaccurate, when the farms that breed more than 500 dogs are added it is estimated that there are 422 factory dog farms in Korea nationwide.

This is a factory-breeding model of companion animals that cannot be found anywhere else in the world.

In all farms, the dogs were kept in tiny off-the-ground battery cages where the animal’s feet, and the entire legs of puppies, fell through the holes of the steel netting floors. Urine and feces also dropped through the holes, piling up on the ground below.

Even at temperatures over 30 degrees Celsius (86 Fahrenheit), none of the 20 dog farms we visited had water in any of the cages.

We saw dogs cruelly confined in cages narrower than the length of their bodies, forced to always stand in one direction or not able to stretch out.

The State of Government’s Management of Dog Farms

At least one million dogs are being raised for slaughter on these ‘meat’ dog farms, but the government’s management only involves the inspection of manure treatment.

Of the 2,862 dog meat farms, the disposal methods reported by the farms nationwide consisted of 2,518 farms composting; 133 disposing through public methods; 28 disposing through farming unions; with no response from 183 farms.

Composting, at 99%, was the highest method of disposal, but it is likely that in reality the feces was left to pile up under the raised wire cages, attracting insects and causing a stench and it was percolating into the ground.

As an example, one farm in Yeoju reported composting as a method of manure disposal, but the 2017 KARA field investigation showed that the manure was rotting, liquefied and percolating into the ground.

However, during their 2015 inspection, this farm was not cited for violation by the city of Yeoju.

It is therefore questionable whether dog farms are handling the manure disposal according to the method they have reported.

In that same time period, the number of dog farms required to file a report for manure treatment facilities and failing to do so was 148.

There is a large gap between these numbers and the lack of manure treatment facility that we saw in reality.

This represents an average of 823 facilities annually were inspected.

For the large factory farms with over 1,000 dogs, 15 cases of violations were confirmed during 95 inspections, showing that the larger the farms the higher the violation rate (15.8%).

Since there are total of 226 city/county/district (75 cities, 82 counties, 69 districts) in Korea, it represents that on average annually each city/county/district government inspected only 3.64 dog farms. Therefore, it is not an exaggeration to state that the government’s management of manure treatment facility for dog farms is currently nonexistent.

Need for public opinion for gradual closure of dog farms

The proliferation of meat dog farms combined with the negligence of the South Korean government has led to the founding of factory style dog farms. It has created a reality where dogs no different than our companion animals are brutally killed on an average of 2,740 per day.

The government must accurately understand the state of the dog farms that have been neglected without any management system, and begin fulfilling their responsibility to protect animals by conducting animal protection inspections starting where the problem is most serious.

Since dogs are not fit for mass breeding, large-scale breeding itself is an animal cruelty.

To create a sustainable society in which humans and animals coexist, it is necessary to create a new culture appropriate to the current era in which there are 10 million pets.

To this end, it is necessary to start public discussions for the phased closure of dog meat farms in which animal cruelty is inherent. This public debate should proceed within a reasonable amount of time.

In addition to this survey on the current state of the dog farms, Representative Lee Jeong-Mi and KARA plan to reveal the results of the investigations on the breeding environment of these dog farms in early July.

We sincerely hope that today’s press conference will be the starting point of the public debate for the phased closure of ‘dog meat farms’. 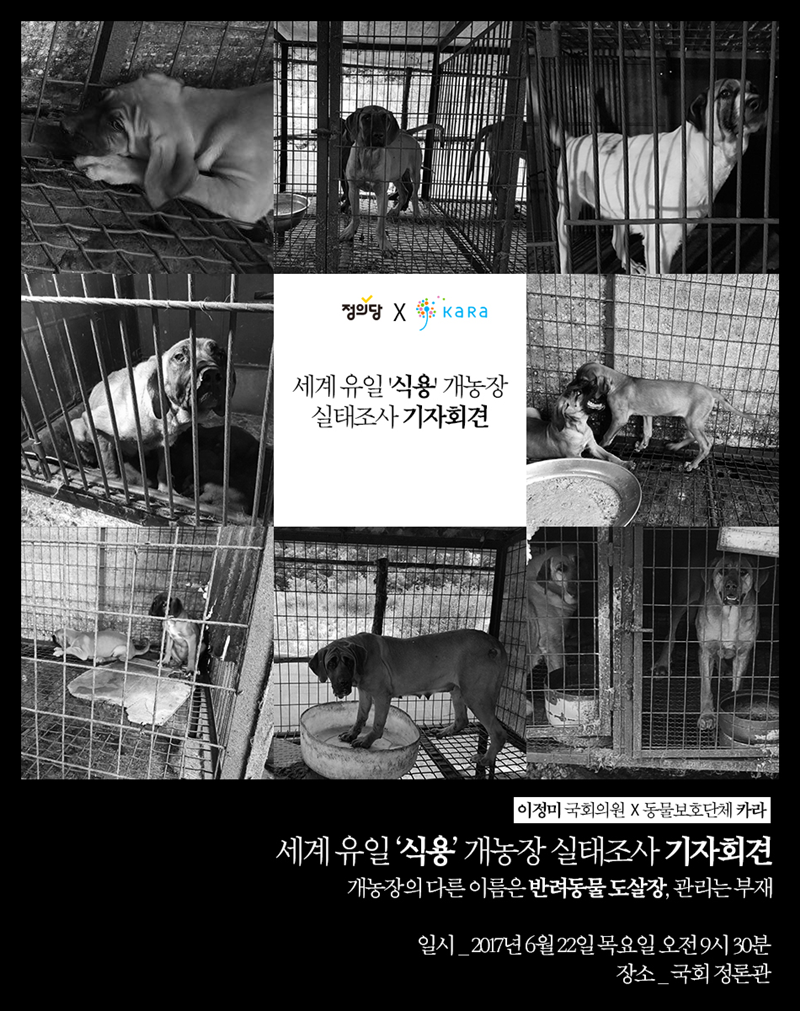 Click HERE to read English article by The Korea Bizwire, “Over 1 Million Dogs Being Raised for Food in Appalling Conditions”.