posted by KoreanDogs.org team on August 31,2012 in Uncategorized

Here are some information from the report:

Based on the S. Korea’s Ministry of Food, Agriculture, Forestry and Fisheries’ statistical yearbook, in 2011, 1.7 million dogs were being raised in dog farms. Improved breeds-430K, Jindo dog-67K, mixed breeds-1.2million. However, all dog breeds are eaten in S. Korea. If you go to Moran Market in Seongnam-city (the largest dog meat market in the country) you will see all kinds of dogs being slaughtered and being sold.

When searched online directory for dog meat restaurant in S. Korea, 4,019 places were retrieved. 10,791 of so called “Health Food Center” were retrieved with 223 specifically listing “dog elixir(dog boiled together with various herbs)” on their menu. 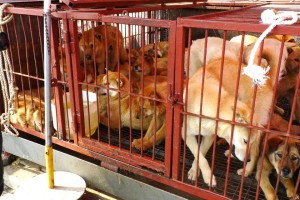 Dog meat distribution is divided into farms, slaughter, wholesale and retail. Small scale farms are shrinking but the large industrialized farms are growing making up the majority of operations. Slaughter is sometimes handled at the farms and distributed but most of the farms hand over the dogs to the slaughterhouses after the raising. Cost of slaughtering one dog can range from $9-$26 USD and some small scale farms handle the slaughtering themselves in order to reduce cost. After the slaughter, dogs and handed over to the wholesale places. From there, dog meats are distributed to the dog meat restaurants and so called “Health Food Centers” all over the country. Sometimes dogs are supplied from farms directly to the dog meat restaurants and “Health Food Centers” and some restaurants raise the dogs themselves.

Dog slaughtering is usually done from late night to early morning when there are no public activities. Transport to the slaughterhouses usually happens during the hours with less traffic for the same reason but occasionally you will see them during the morning or afternoon hours with dogs tightly stuffed into the cage without room to move…suffering.

According to the industry, the reason for stuffing the dogs into cages so tightly is to prevent them from fighting that can cause injuries or even death during the transport. These dogs can barely breath and experience extreme physical and emotional stress and when they arrive at slaughterhouses, they witness each other getting electrocuted and thrown into the boiling water causing unimaginable terror and stress.

Currently dog meat related laws are largely divided into two jurisdictions: Ministry of Food, Agriculture, Forestry and Fisheries (MFAFF) handles through the point of slaughter and Ministry of Health and Welfare (MHW) handles after the slaughter. Dog meat is judged as illegal by the MFAFF and legal by the MHW.

Whenever there is a big international event, the government responded actively in order to avoid external criticism and in recent years China also has been actively responding in order to avoid diplomatic problems.
Dog meat industry is consistently calling for the legalization while the animal protection groups are calling for the ban of dog meat consumption. Regarding this issue, government is consistently not taking any action. Internationally China, Korea, Vietnam are the countries that still have not banned the dog meat consumption and China is currently pushing forward for a law to ban dog meat consumption.

However, only in Korea recently there was a movement from the government to legalize dog meat consumption.
As this situation continues, the dog meat industry has formed a big market.

The number of small operations that farms, slaughters and distributes is shrinking but we are seeing many large breeding farms and some of them even handling the slaughter and distribution becoming more industrialized.
The government is continuing to agonize over the banning and legalization of dog meat consumption but if this situation drags on dog meat industry is likely to develop into an even bigger industry.

Pushing forward for the legislation to ban the slaughter of dogs for consumption and the sales of dog meat to be included in the Animal Protection Act. This is the most effective solution from the perspective of boosting international image, right to life and animal protection. However, a large scale resistance from the proponents of dog meat consumption and the related industry to sustain their livelihood is forecasted.

1) Relating to the Ministry of Food, Agriculture, Forestry and Fisheries (MFAFF)

Livestock Industry Act under the jurisdiction of MFAFF classify dogs as livestock but its product is not being acknowledged. Livestock Products Sanitary Control Act related to the livestock slaughter and sanitation excludes dogs. Due to the lack of laws to regulate, farming and slaughter related problems are difficult to regulate with the current law.

In revising related laws, we can push for a bill to exclude dogs from the livestock classification in the Livestock Act.
Through this action, livestock industry that raises dogs for consumption become illegal and the debate about its product dog meat and the dog meat legalization can be avoided.

Dog slaughter can be prohibited in the Animal Protection Act or it can be added explicitly into the definition of animal abuse.
Adding the clauses to ban electrocution which is currently being used widely and to ban usage of cardiac arrest and respiratory arrest drugs by general public are other ways to go about this.

2) Relating to the Ministry of Health and Welfare (MHW)
Designating dog meat as a harmful food. In the case of pushing forward for the designation as a harmful food, we should reference to the sanitation inspection results that is conducted every summer by MHW but MHW is extremely hesitant to disclose it to the public. In this case, we can forecast a big backlash from the dog meat proponents arguing that it is a stepping stone to illegalization of dog meat consumption.

Regulate using the current laws while pushing forward with the plans 1 and 2 mentioned above.

1) Relating to the Ministry of Food, Agriculture, Forestry and Fisheries (MFAFF)

2) Relating to Ministry of Environment (ME)

Breeding farms and dog farms should be regulated through the livestock excrement management and utilization related laws. Regulation is possible for farms not reporting on the livestock excrement discharge facilities and farms located in the livestock breeding prohibition zone. Water quality and ecosystem conservation laws can be applied to the spilling of wastes into the public water resources from the dog slaughter and dog meat related businesses.

3) Relating to the Ministry of Health and Welfare (MHW)

All food excluding drugs are under the jurisdiction of the Food Sanitation Law. From the point of slaughter MHW has the jurisdiction and it’s been quite controversial. Beginning in 2008, MHW has been conducting sanitation inspection of dog meat restaurants every summer. This means dog meat is already recognized as food and currently being regulated.

Collecting and sale of dog meat is not subject to licensing. However, dog meat restaurants and health food centers (which makes “dog elixir”) need to be licensed as food service establishments or health function food business and they can be regulated using the Food Sanitation Law and enforcement is possible when operating without the license.

And although there is no standards specific to dog meat, because they operate under the license of food service establishment, they can be punished based on the standards violation for packaging containers or equipment in accordance with the applicable laws.