Seoul’s official response to our petition

Seoul, South Korea, is the most heinous city in the world! Why? They boast the economic equality amongst first world countries with companies like Samsung, Hyundai, LG, Kia, Daewoo. South Koreans are one of the most educated people in the world and yet, they allow the barbaric torture to the man’s best friends – dogs and puppies – to continue. Shame on Seoul and their government!!!

Below is an official response we received from City of Seoul regarding our petition letter. The letter tries to deceive you to believe that they doing all they can in animal welfare, but the fact is nothing has change for the thousands of dogs being slaughtered in Seoul everyday. These poor animals are daily being bludgeoned, boiled and burned alive! Don’t let this letter fool you! The government in Seoul are doing nothing to stop the torture and slaughter. They want us to understand that people are changing, but how long do we have to be understanding? How many more dogs must be brutalised and slaughtered before they stop the consumption of dog meat altogether? 50 years? 100 years? We don’t have that much patience because our heart is breaking into pieces every day, every minute for these voiceless ones! Please keep the pressure on Seoul, by voicing your protest and boycotting this most shameful and indifferent city in the world! 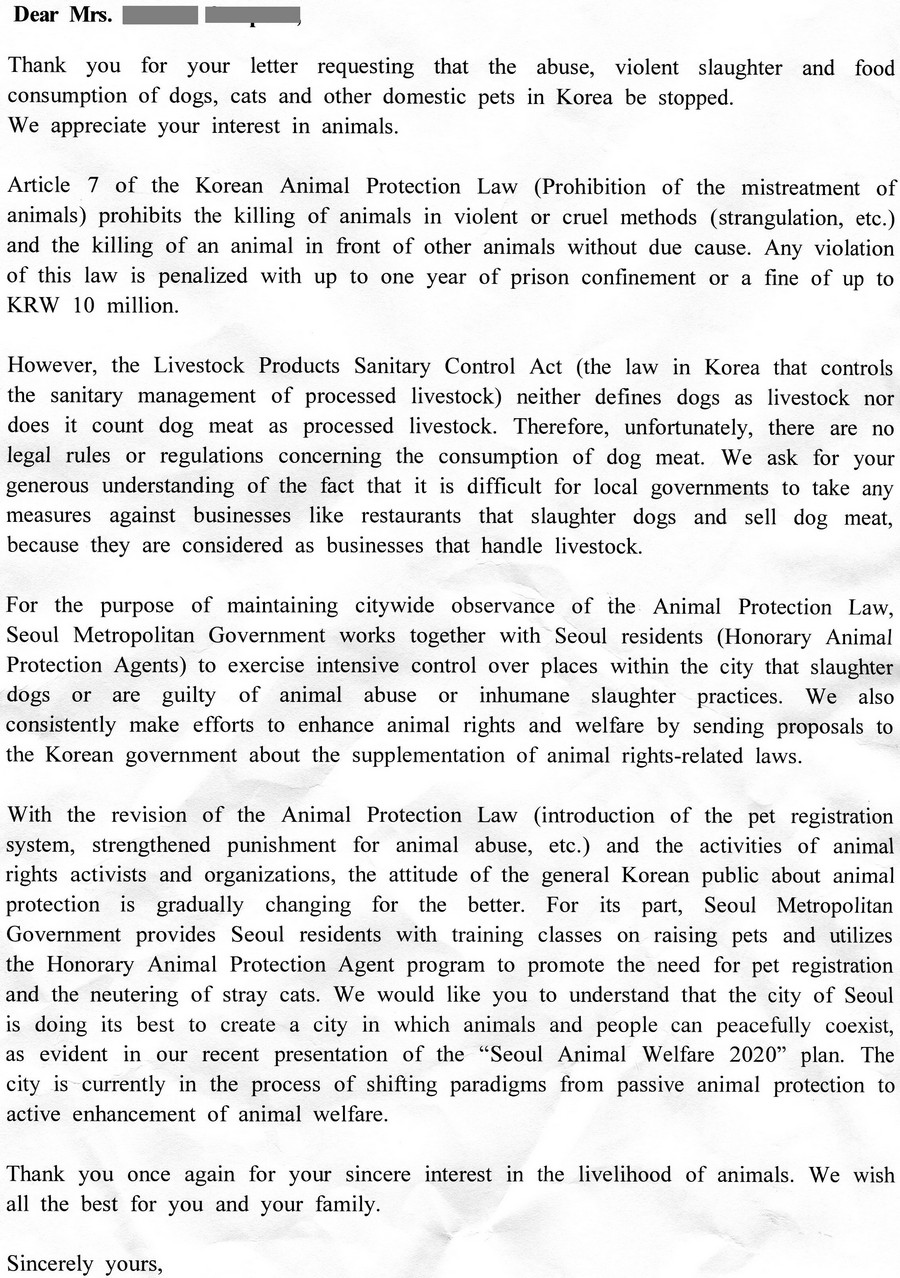 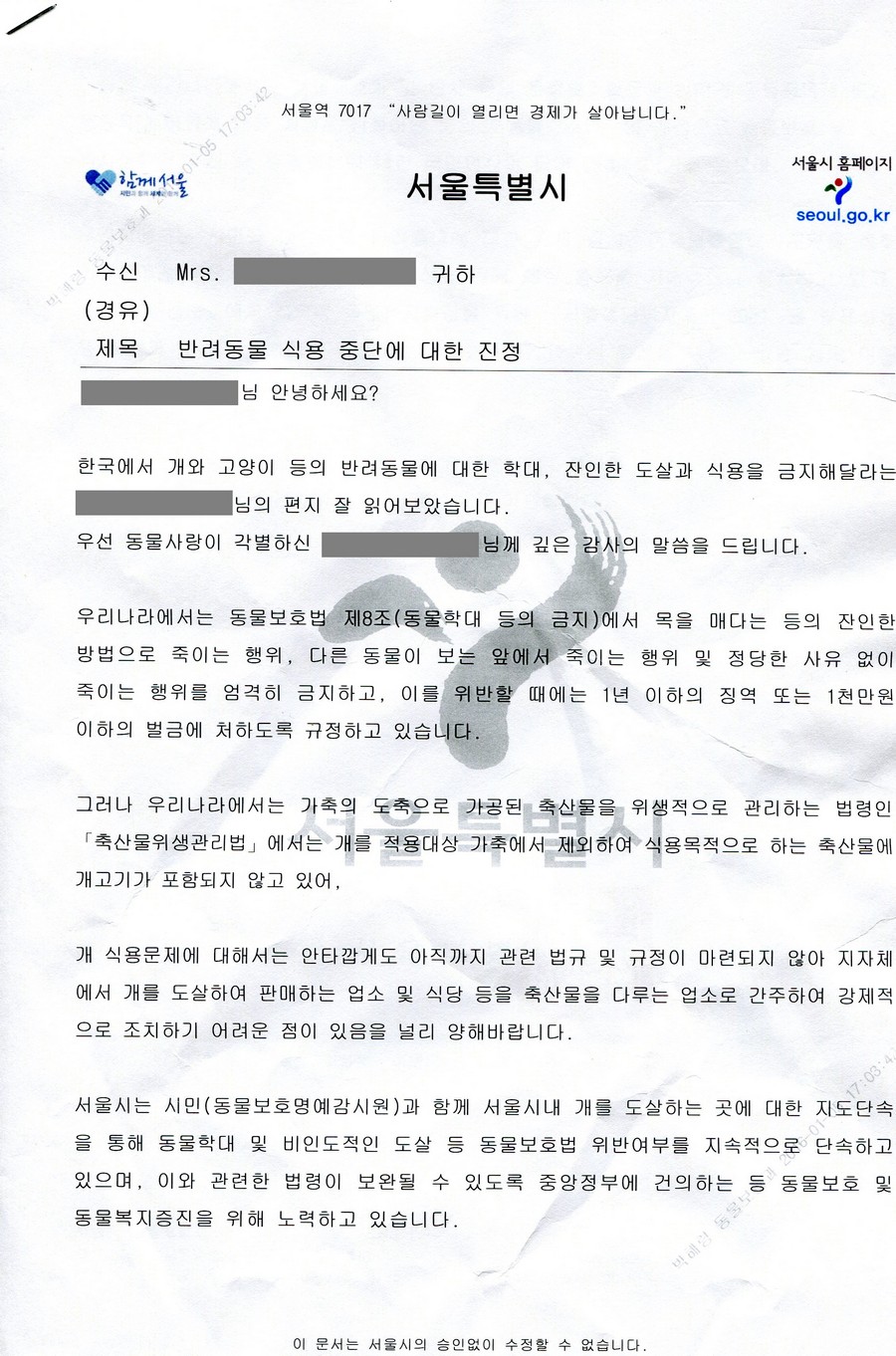 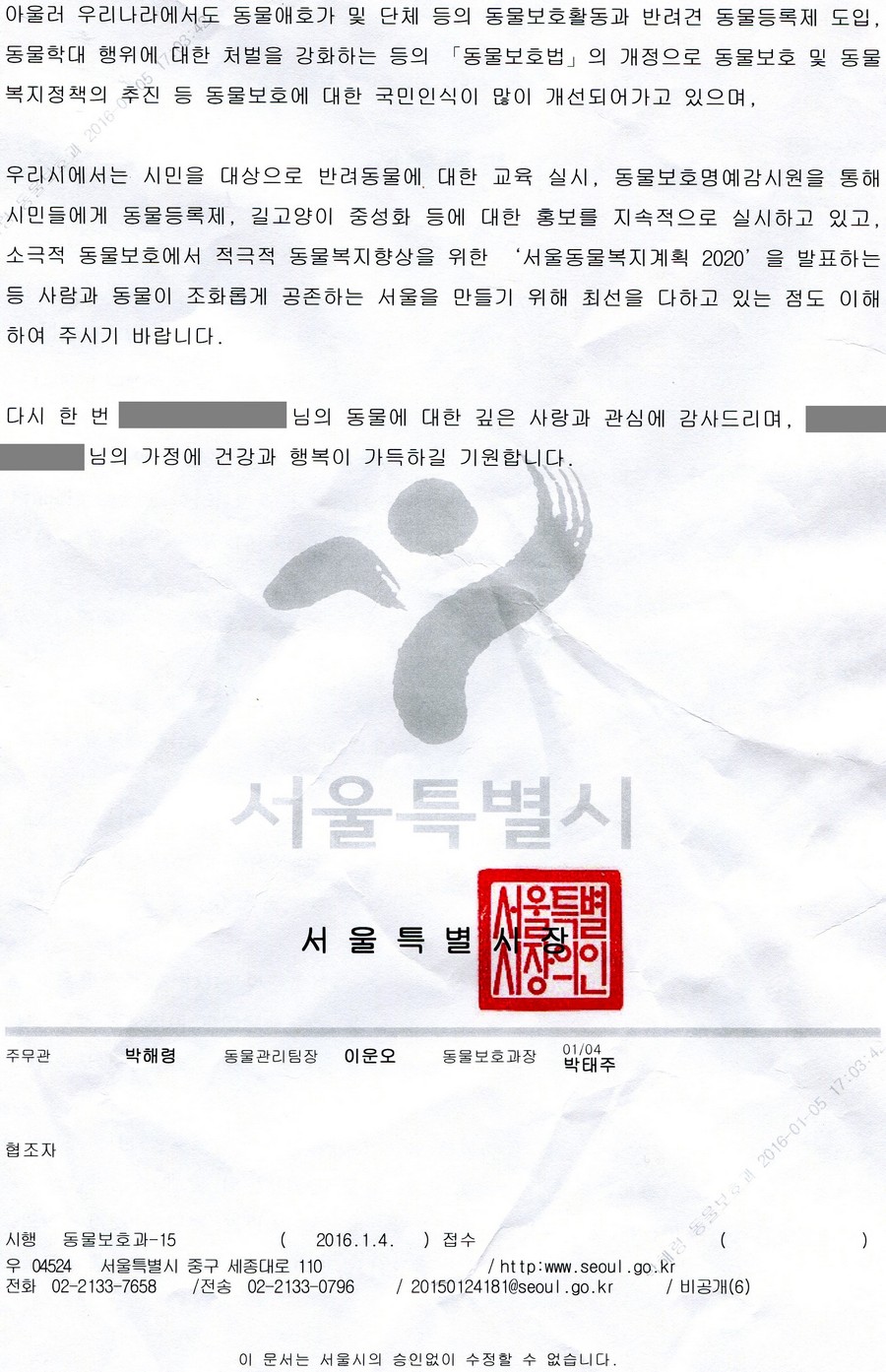 Thank you for your letter requesting that the abuse, violent slaughter and food consumption of dogs, cats and other domestic pets in Korea be stopped. We appreciate your interest in animals.

Article 7 of the Korean Animal Protection Law (Prohibition of the mistreatment of animals) prohibits the killing of animals in violent or cruel methods (strangulation, etc.) and the killing of an animal in front of other animals without due cause. Any violation of this law is penalized with up to one year of prison confinement or a fine of up to KRW 10 million.

However, the Livestock Products Sanitary Control Act (the law in Korea that controls the sanitary management of processed livestock) neither defines dogs as livestock nor does it count dog meat as processed livestock. Therefore, unfortunately, there are no legal rules or regulations concerning the consumption of dog meat. We ask for your generous understanding of the fact that it is difficult for local government to take any measures against businesses like restaurants that slaughter dogs and sell dog meat, because they are considered as businesses that handle livestock.

For the purpose of maintaining citywide observance of the Animal Protection Law, Seoul Metropolitan Government works together with Seoul residents (Honorary Animal Protection Agents) to exercise intensive control over places within the city that slaughter dogs or are guilty of animal abuse or inhumane slaughter practices. We also make consistent efforts to enhance animal rights and welfare by sending proposals to the Korean government about the supplementation of animal-related laws.

With the revision of the Animal Protection Law (introduction of the pet registration system, strengthened punishment for animal abuse, etc.) and the activities of animal rights activists and organisations, the attitude of the general Korean public about animal protection is gradually changing for the better. For its part, Seoul Metropolitan Government provides Seoul residents with training classes on raising pets and utilizes the Honorary Animal Protection Agent program to promote the need for pet registration and the neutering of stray cats. We would like you to understand that the city of Seoul is doing its best to create a city in which animals and people can peacefully coexist, as evident in our recent presentation of the “Seoul Animal Welfare 2020” plan. The city is currently in the process of shifting paradigms from passive animal protection to active enhancement of animal welfare.

Thank you again for your sincere interest in the livelihood of animals. We wish you all the best for you and your family. 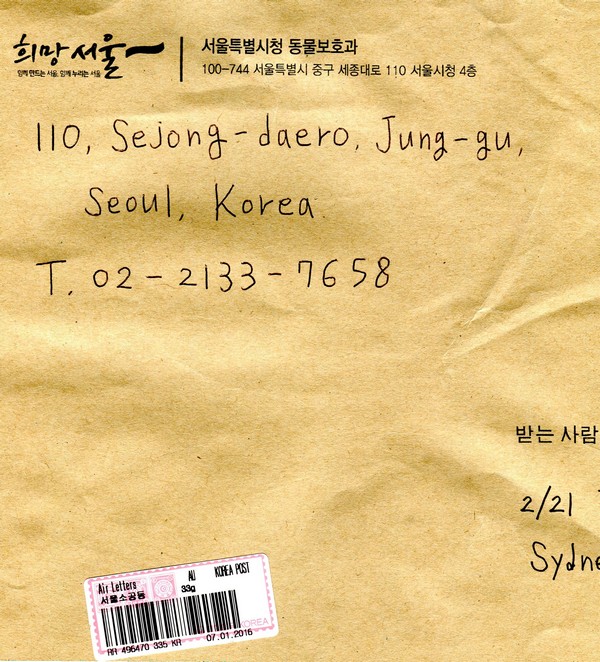 Send a your protest letter to Seoul Mayor Won-Soon Park: