posted by KoreanDogs.org team on July 9,2012 in Campaign, News, Petitions 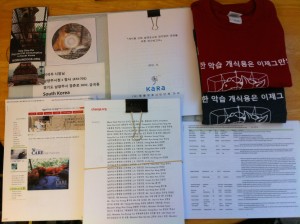 We mailed 21,805 signatures along with your comments, dog meat report, a copy of undercover video, leaflets and a couple of KOREANDOGS.ORG campaign t-shirts to Mayor Seok-Woo Lee of Namyangju, South Korea today by international priority mail. We look forward to the response from Mayor Lee soon. We hope that Mayor Lee and his staff will not ignore our sincere and very urgent pleading to close down this nightmarish “hell hole” dog farm/slaughterhouses in his city right away and help end the South Korean dog and cat meat industry that brutalizes and murders estimated 2.5 million animals each year.

We also want to tell you about a recent case of a dog named “Gilyongee” that was lured and killed by a neighbor for purpose of eating and how this perpetrator is raising 3 more dogs to eat in Cheongsong, South Korea. Click here to read the story!

Please speak up for the dogs of South Korea and urge their government to enact a stronger Animal Protection law to prevent more murders of dogs like “Gilyongee” and to BAN THE DOG AND CAT MEAT TRADE FOR GOOD! Click here to join us on Facebook to write emails to their government! It is so easy and only takes a minute. Click here for “Call to Action”!

Please continue to speak out for the animals of South Korean dog and cat meat trade by boycotting all South Korean products such as Samsung, LG, Hyundai, Kia, SK, Daewoo (Fortune Global 500 List)….and their tourism. Also, please continue to share this petition because signatures get delivered electronically real time as well to many of the South Korean government officials including President Geun-Hye Park. 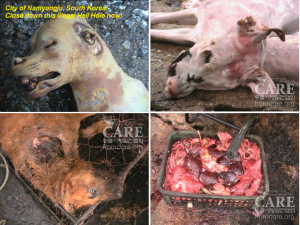 In a recent TV program by JTBC, a couple of illegal dog slaughterhouses are exposed to illustrate the lawlessness and appalling conditions of many slaughterhouses that are being operated around the country in South Korea. Dogs are being slaughtered right next to the terrified live dogs waiting for their horrible fate and the unsanitary conditions of these illegal slaughterhouses are threat to the public health and the environment. It also exposes that abandoned dogs in animal shelters are being eaten by some shelter officials or being sold as meat for their profit.

One of the two slaughterhouses exposed in this program is located in the City of Namyangju and this slaughterhouse has been reported to the city officials two years ago by an animal protection group called CARE (Coexistence of Animal Rights) but nothing has been done since then and it’s still operating in appalling and unspeakable condition. See the photos from CARE two years ago when they visited and rescued some of the dogs and reported this slaughterhouse to the city: http://fromcare.org/our/notice.htm?code=notice&bbs_id=11483&page=1&Sch_Method&Sch_Txt&md=read 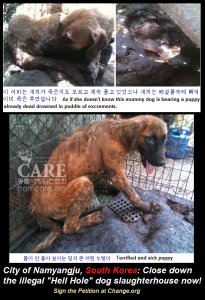 At the time, based on the report by CARE, mommy dog had to eat the dead puppies in order to survive in this hellish slaughterhouse. Picture tells a thousand words so please click the above link and see the photos for yourself.

Mayor Seok Woo Lee,
Why is your city not doing anything to close this place down?
This slaughterhouse is clearly illegal, threat to the public health and environment and its cruelty is beyond imagination. Your city government is neglecting their duty and there is no excuse for not taking action except the laziness and apathy. Please take the steps immediately to close this place down for good. Countless dogs are being tortured and having to endure an unspeakable suffering even in this moment. This is a shame of Namyangju city that you are in charge of and reflects badly on your ability to lead and govern and your character. This also reflects very negatively on the country of South Korea as a whole as there are many places like this “Hell Hole” all around the country.

We will boycott S. Korea and S. Korean businesses until your illegal slaghterhouse is closed down and S. Korea takes animal rights seriously and end the shameful dog meat trade once and for all.

“Life is as dear to the mute creature as it is to a man. Just as one wants happiness and fears pain, just as one wants to live and not to die, so do other creatures.”
~His Holiness The Dalai Lama