posted by KoreanDogs.org team on September 21,2012 in News

Dog farmers breeding dogs for the purpose of consumption will be holding a large-scale rally in front of the government complex in Gwancheon-city to urge the legalization and support of their industry. Left in the regulation blind spot based on the current laws, businesses that breed dogs for consumption have been invoking controversies over the sanitation and animal cruelty issues. That being said, this is their first collective action to urge support from the government and this will likely to intensify the debate surrounding the legalization of dog meat once again.

Korean Meat Dog Farmers Association announced on September 19 that they will hold a “Rally to fight for the meat dog farmers’ right to livelihood” on September 24 with about 500 farmers participating from around the country. Korean Meat Dog Farmers Association has about 1,000 members. The association demanded the following:
• Include dogs in the ‘Livestock Products Sanitary Control Act’
• Permit dog farms to register as livestock industry
• Government support of excrement handling facility

The association is reviewing the idea of bringing dogs and returning them to the government at the rally.

Association secretary-general, Young-In Choi argued “The government is excluding the meat dog farmers from their support” and “we are being threatened for our survival from the government’s neglect and the malicious slander by the animal protection groups”. Currently, dogs are classified as a livestock under the ‘Livestock Industry Act’ and ‘Livestock Prevention of Contagious Diseases Act’ but the ‘Livestock Products Sanitary Control Act’ that deals with the slaughter and distribution process of livestock recognizes only cows, pigs, chickens, etc as livestock. With this current situation, suspicions around the distribution of sick or abandoned dogs as meat, unsanitary conditions, and cruel slaughter methods during the slaughter and distribution process are being raised as chronic problems.

Ministry of Food, Agriculture, Forestry and Fisheries which is in charge stated, “We cannot accept their demand because the government support signifies the acknowledgement of dog meat consumption” and “for the same reason we keep rejecting the request to establish the association as a legal entity”.

Korea Animal Rights Advocates (KARA) stated “Because dog meat consumption is dwindling, it should be banned with restrictions step-by-step. We will examine the countermeasures after reviewing the contents of the rally”. Currently it is known that there are 15,000-20,000 dog farms that breeds dogs for consumption with total of 5 million dogs nationwide. 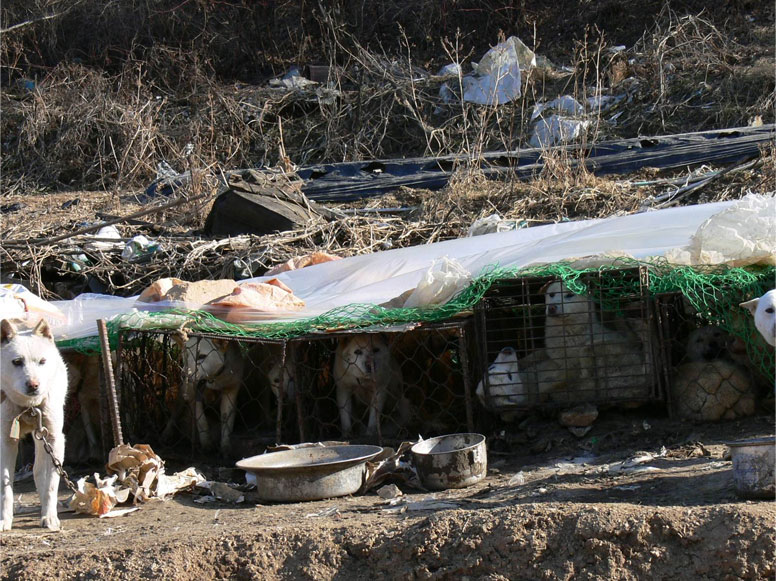