[Update: January 23, 2018] The Korean government changes its plan and offers a subsidy to only those dog meat restaurants that change their business.

Due to the outcry by the animal activists protesting the Korean government’s plan to subsidize dog meat restaurants to change their signs while still allowing them to sell dog meat, the Korean government has changed its plans. According to the Hankookilbo report on January 9, 2018, the government now requires the dog meat restaurants to change their business to be eligible for the subsidy and the amount offered has increased to 20,000,000 won per restaurant. However, only 2 restaurants have accepted this offer in the past year. Click HERE to learn more in Korean.

Please contact the news media in your country with these translations. Don’t see your language? If you would like to translate for us in your language, please contact us. We are always on the lookout for translation volunteers so that we can reach more people around the world.

The PyeongChang 2018 Winter Olympics is less than a year away. On our “Boycott PyeongChang 2018 Action Center” we have a list of actions you can take to protest South Korea’s horrific cruelty of its dog and cat meat industry.

Below is a translation of Korea Animal Rights Advocates’ (KARA) commentary regarding PyeongChang’s plan to dodge criticism of Korea’s dog meat cruelty.

[Commentary] We examine the limitation and significance of changing signboards of Dog Meat Restaurants in Pyeongchang ahead of the 2018 Winter Olympic in Pyeongchang.

Gangwon Province is currently making preparations to welcome guests to the Winter Olympics, which will be held in February 2018. To alleviate the shortage of lodging accommodations and restaurants, and to create income for agricultural households, support will be provided to the hospitality industry to strengthen the spirit of service as well as networking with the local agricultural community to introduce Korean culture to the visitors. In addition, certain restaurants that may evoke negative emotions from foreign visitors will undergo renovations, including new signage, in order to conceal the underlying cause of the controversy and avert debate.

What is the underlying cause of the expected negative emotions from the Winter Olympics guests? 18 dog meat restaurants in Gangwon Province around Pyeongchang and Gangneung. The government will subsidize up to 10,000,000 won for each restaurant to change their signs (3,000,000) and renovate their facilities (7,000,000). 50% of the cost for this project will be paid by the Province and 50% by the city.

Protests and boycotts against Korea’s Boshintang (dog meat soup) and the dog meat industry’s abuse of dogs is common prior to any major international event. The government, however, has routinely responded with stop-gap measures such as taking down signs rather than resolving the underlying problem of the dog meat industry itself. Despite the fact that the Animal Protection Act was the result of the public’s outcry during the 1988 Seoul Olympics against the cruelty of the dog meat industry, the government has failed to make any progress to address this problem in the 30 years since.

While there are only 18 restaurants at issue, removing signs reading “Boshintang, Sacheoltang, Yeongyangtang, Yeongyangwon” that may evoke disgust is certainly significant, as is renovating windows, entry ways, and walls to remove words and phrases relating to dog meat. We don’t think that providing financial support of 7,000,000 won to these businesses for such renovations is completely inappropriate.

However, this project cannot solve the fundamental problem and therefore is strictly a formality. It will be difficult to avoid condemnation of the dog meat trade and its cruelty to dogs by simply taking down the signs of 18 dog meat soup restaurants. It will be equally as hard to avoid criticism that the removal of the signage is just for show.

The strange name that the government titled this project, ‘Restaurants that evoke negative emotions from the foreigners’, is also a problem. While opposition to the consumption of dog meat is becoming more vocal within our country and the amendment to the animal protection law to punish the slaughter of dogs is ongoing because animal cruelty is part of the dog meat trade, the project title leads people to mistakenly believe this issue is just a conflict between Koreans and foreigners.

Moreover, the Gangwon Provincial government is allowing these 18 restaurants to continue normal business operations during the Olympics despite the removal of their signs, and to put back the signs once the Olympics is over stating that they are respecting the requests of these dog meat restaurants.

In addition, Gangwon Provincial government has not disclosed any plans to induce the dog meat restaurants receiving 7,000,000 won in financial subsidies for facility renovation to change their business models either during or after the Olympics.

The demand for dog meat soup is declining while acceptance of dogs as companion animals is increasing.

Regardless of the preparations for hosting the guests of the upcoming international event, Korean society must begin discussions now about ending dog meat consumption, which is synonymous with large scale animal cruelty.

The Gangwon Provincial government must use the sign removal project as an opportunity to raise the international status of Korea and dispel the world’s concern towards our weak animal welfare standards as symbolized by the dog meat trade and the consumption of dog meat.

Unfortunately, at the moment, Gangwon’s strategy is as ineffective as building a house on sand! 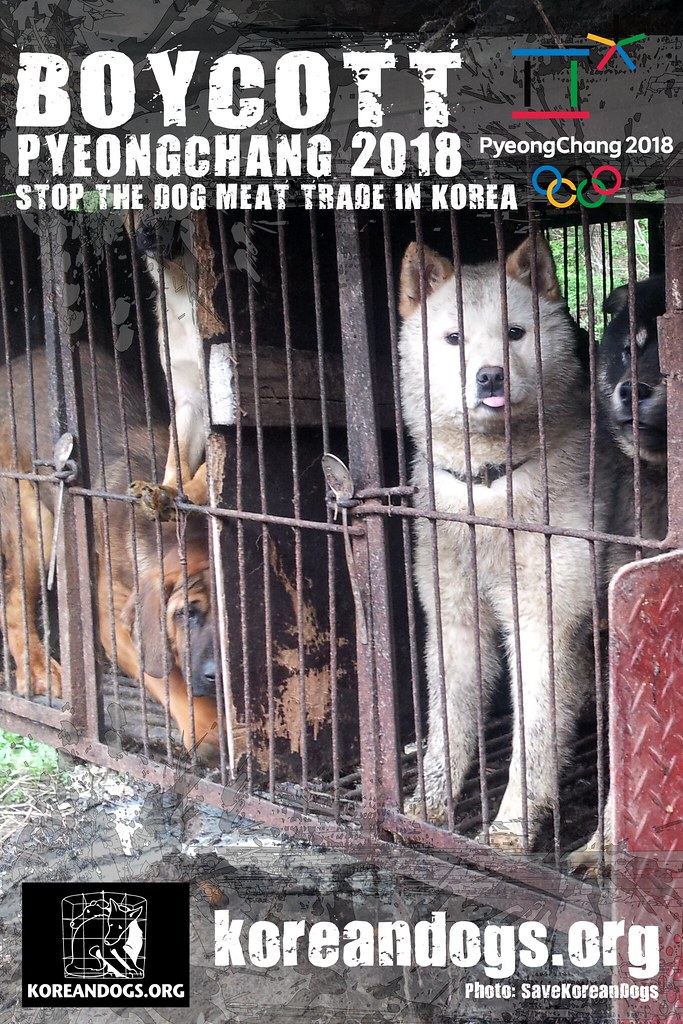