posted by KoreanDogs.org team on May 9,2016 in Action Alert, Campaign

“The City of Brea recently received numerous e-mails from concerned individuals regarding Anseong, Korea – Brea’s Sister City. The e-mails made upsetting accusations regarding alleged abuse of dogs in Anseong, Korea. City of Brea staff immediately reached out to representatives of the Brea Korean Sister City Association (BKSCA) to help ascertain the validity of these comments. The BKSCA reached out to their counterparts in Korea and received a quick response from their city offices. Anseong Sister City representatives assured that the alleged practices are in fact illegal in Anseong, and carry severe penalties. Rest assured, the City of Brea strongly disapproves of any inhumane animal treatment and will continue to monitor the situation.
-Christine Marick Mayor” 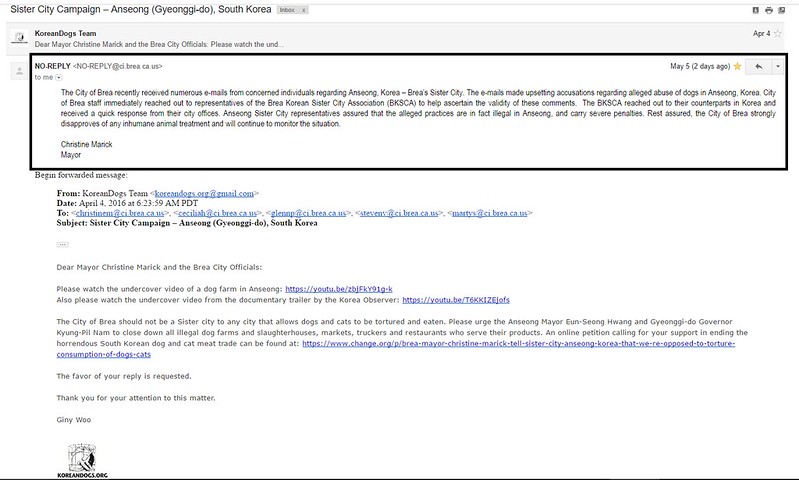 We are very grateful to Mayor Marick and her colleagues for taking swift action; however, we are disappointed that the City of Brea has been ‘brushed off’ with the disingenuous reply from the city offices in Anseong, who were quick to respond but simply stated that “the alleged practices are in fact illegal in Anseong, and carry severe penalties”.

We are again contacting Mayor Marick, to thank her for responding to our concerns but to point out that, although the Anseong statement is true, it is whitewashing the fact that these laws are neither policed nor enforced; and merely put in place “to shun criticism from foreign countries.” (as quoted by Dr Dog: Ann Yong-Geun, August 2011).

Dog and Cat Cruelty and Abuse in Anseong, South Korea, for the meat trade.

We would like to thank you very much for responding to our petition asking for you to make contact with Mayor Eun-Seong Hwang of Anseong, to urge him to put an end to this trade and thereby the cruelty it embodies.

We note, with sadness, however, that the response you received from their city offices is completely disingenuous in that they are simply confirming that these laws are in place in their country. What they appear to have failed to deny is that these laws are being transgressed throughout South Korea on a daily basis: the collected evidence speaks for itself, for example the filming by the Korea Observer, published on Youtube, the clip of which was referenced in our petition.

This video, confirming such transgression, is not an isolated example: many pictures, videos, and witness testimonies from caring South Korean Citizens, are available for public viewing on many forms of social media.

As noted in a letter to President Obama, the following laws are in place in South Korea, but they are being transgressed all over the country in many ways, including in Anseong; for example:

In addition, Yong-Geun Ann(professor at the Department of Food and Nutrition at Chung Cheong College, and president of The Korean Society of Food and Nutrition – and self-named ‘Dr Dog’), contrary to recognized medical evidence, actively promotes dog eating (“The World Health Organization has warned that eating dog meat increases the risk of contracting cholera 20-fold”).

It is worth noting, too, that while trying to justify dog eating, Mr Ann is quoted in The Korea Herald, (August 2011), as saying :
“Ironically, many of the people who oppose the eating of dog meat are Korea’s own animal protection activists. The government supported these groups by enacting an animal protection law to shun criticism from foreign countries.”

To illustrate the scale of the dog meat business in Anseong, a simple search for “Anseong Dog Meat Restaurant” on a popular search engine in South Korea (called Naver business directory search) produced a list of 71 search results. This proves just how many dog farms and slaughterhouses there must be in, or in close proximity to that city, to be able to supply meat to all of these restaurants (and how many others?).

Mayor Marick, we, therefore, urge you to once again review the evidence, and to do everything in your power to help bring an end to the dog meat trade in your Sister City, Anseong.

Below are 3 search results on Naver (the most popular search engine in Korea) for dog meat restaurant using three different names used for dog meat soup: Boshintang, Sacheoltang and Youngyangtang. 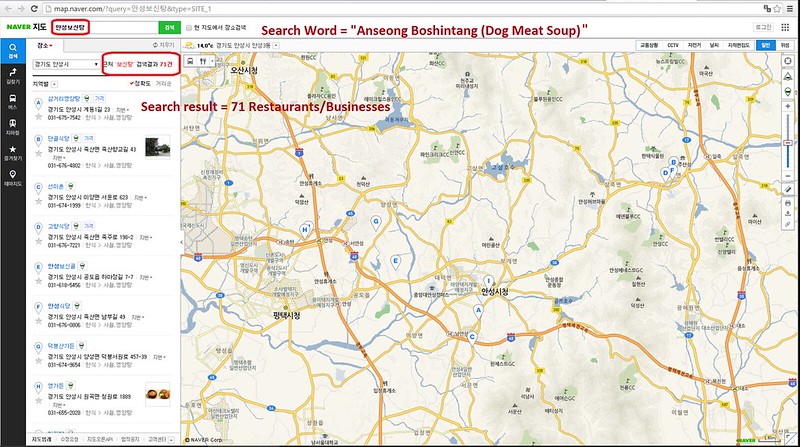 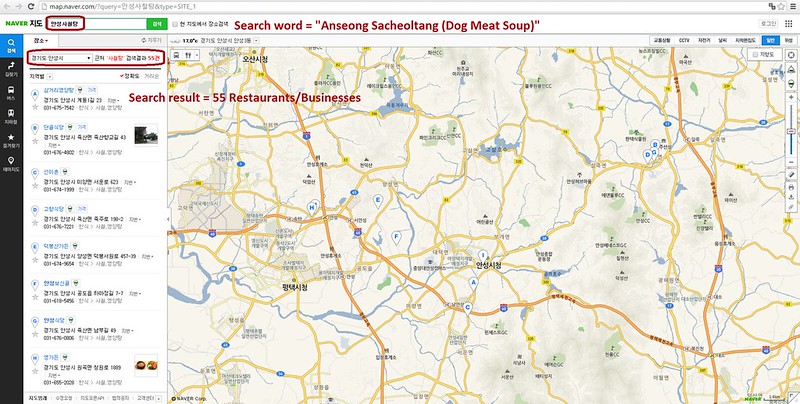 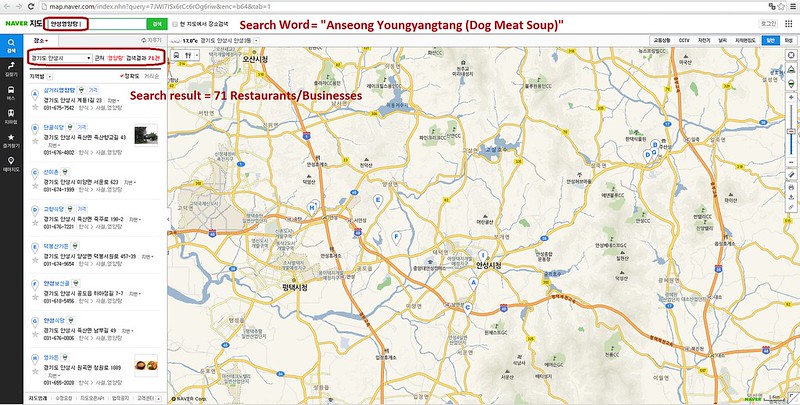