posted by KoreanDogs.org team on June 28,2016 in Action Alert, Campaign 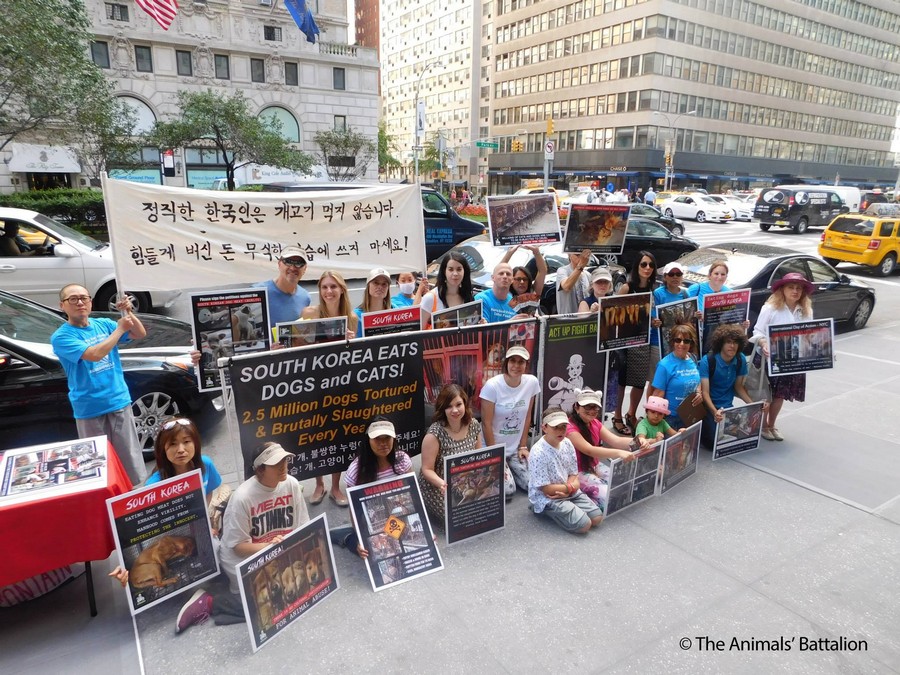 The Animals' Battalion invites you to join the first S.Korean …

We are so ready! Please make an effort to come. It is a very important demo since it is the first day of the Boknal Dog Meat Festival and the S. Korean media has been paying attention to the New York demos since last year.

In addition to the 1000 flyers, signs, banners, t-shirts, petitions to sign and visors. This time we will have a TV showing videos of the cruelty involved in the Boknal festival. It will be a great tool for those who deny that this is still happening in South Korea. Thanks to Stop the Dog and Cat Consumption in S. Korea (koreandogs.org) and Nami Kim for their support.

Hope to see you all this Friday.

Animals’ Battalion will be holding a series of demonstrations, once again, in New York City, outside the South Korean Consulate, to make that Government aware of how strongly we abhor their indifference to the mass cruelty and suffering inflicted on sentient animals, within the dog and cat meat trades; and also of the failure of that Government to bring about an end to these evil trades.

In mutual support with Animals’ Battalion, and KoreanDogs.org, no matter where you are in the world, we really hope that you can show your support and make your feelings known, by joining us to be part of ‘one voice’: we are asking you to take part in a telephone and mail ‘blitz’ at the same time as these demonstrations are being held, to back them up by getting your own message across to the South Korean Embassy within your country; details of which you can find here: https://koreandogs.org/what-you-can-do/contacts-for-protest/call-south-korean-embassy/ You can also find any updated information HERE.

These are the dates, and information on the three events:

Whether writing or telephoning, here is an idea of the wording you can use:

This campaign is in many languages: